Ned Price said the United States also urges all other U.N. members to do the same to prevent North Korea from further advancing its nuclear and weapons of mass destruction (WMD) capabilities.

"We do remain committed to the sanctions regime. We call on all U.N. members to fulfill their sanctions obligations under existing U.N. Security Council resolutions to limit the DPRK's ability to acquire resources and technology needed to advance its threatening and unlawful WMD and ballistic missile programs," he said in a daily press briefing. 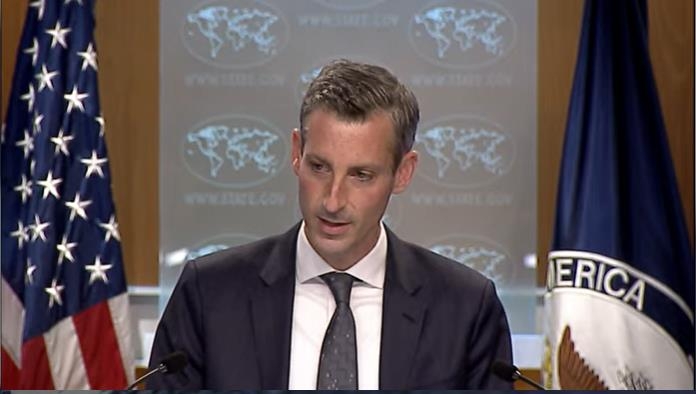 The remarks come after a report said China and Russia have circulated a draft resolution to U.N. Security Council members to lift a "host of sanctions" against North Korea.

Price declined to comment directly on what he called "internal workings of the U.N. Security Council," only reiterating U.S. commitment to working with North Korea through diplomacy.

"We continue to seek sustained and serious diplomacy with the DPRK. We call on Pyongyang to refrain from provocations and to engage in discussions. Our goal, as we have said on any number of occasions, remains the complete denuclearization of the Korean Peninsula," he said.

North Korea is ignoring U.S. overtures for dialogue, accusing Washington of being hostile toward it.

"We have no hostile intent towards the DPRK. Our intent is to engage in sustained, constructive diplomacy, including with the DPRK," the department spokesperson said.

Price also reaffirmed the U.S. commitment to helping the people of the impoverished North.

"We've also made the point that even when we have profound disagreements with a particular government or a particular regime, as of course we do in the case of the DPRK, we take into account the humanitarian conditions of the people of that country," he said.

"And so we are concerned about the humanitarian situation in the DPRK. We are working with our allies and our partners to determine how we might be able to support the humanitarian needs of the North Korean people, and that is something that we're committed to do."