SEOUL, Nov. 5 (Yonhap) -- Former Prosecutor General Yoon Seok-youl was named the presidential nominee of the main opposition People Power Party (PPP) on Friday in a move that pits the political novice championing the rule of law against a progressive politician seeking to extend the liberal rule in the election four months away. 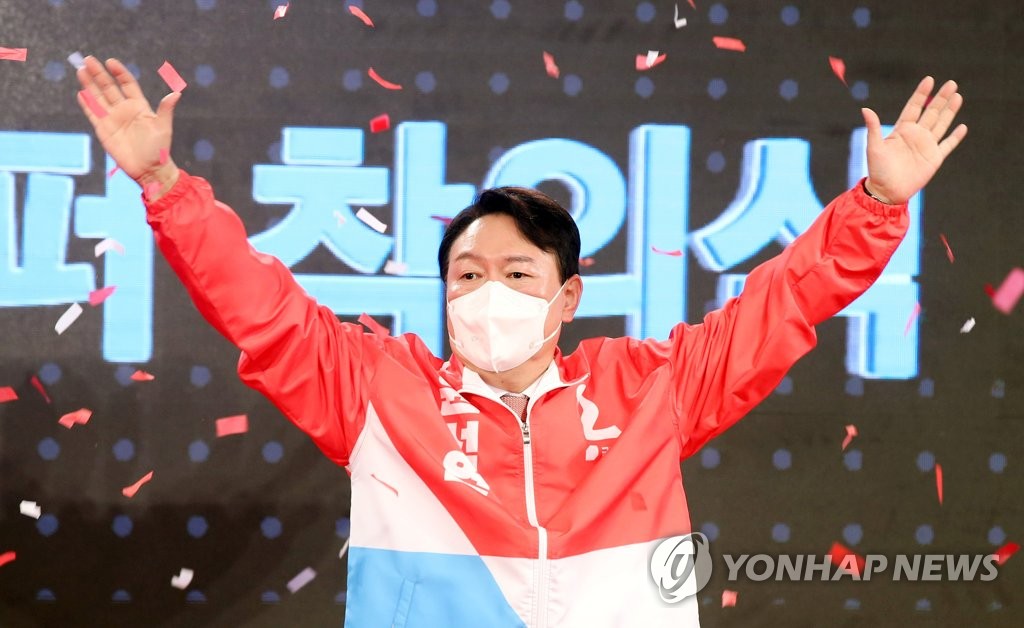 The results were announced at a PPP national convention at the Kim Koo Museum and Library in Seoul. The conservative party conducted its primary in three stages over 72 days.

"I will achieve a change of government without fail and end the politics of division and anger, corruption and plunder," Yoon said in his acceptance speech.

He cast the upcoming election as a battle between "rationalists and populists" and between a candidate "of common sense" and one without, referring to the ruling Democratic Party's nominee, Lee Jae-myung.

"I ask you to pass judgment on the unconscionable attempt to seek unprincipled victory through a candidate representing division and populism," Yoon said.

The presidential election scheduled for March 9 is expected to be largely a competition between Yoon and Lee, though two other candidates, Ahn Cheol-soo of the minor opposition People's Party and Sim Sang-jeung of the minor progressive Justice Party, have declared their bids. 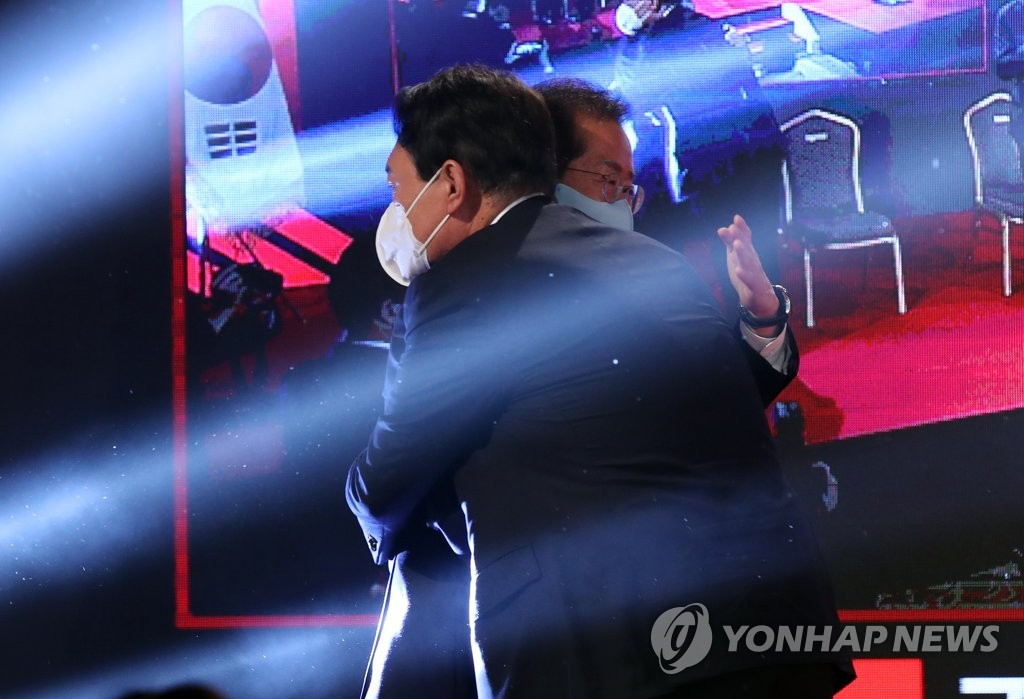 Yoon emerged as a powerful opposition hopeful during his public feuds with the Moon Jae-in administration over prosecution reform and politically sensitive probes.

The 60-year-old former prosecutor had widely been expected to win the PPP's nomination until Hong's sudden recent surge in opinion polls made the outcome uncertain.

"Now we are one team," Yoon said. "We do not even have the freedom to be divided before the great cause of changing regimes. If we do not live up to the burning desires of the people, we will all be committing a lasting sin before the people and history."

Yoon's biggest strength is considered to be his reputation for sticking to principles and the rule of law, as demonstrated in his investigations into powerful figures of both the conservative and liberal blocs during his decadeslong career as a prosecutor.

He made a name for himself in 2013 while investigating allegations that the country's main spy agency meddled in the 2012 presidential campaign to help then ruling party candidate Park Geun-hye get elected. 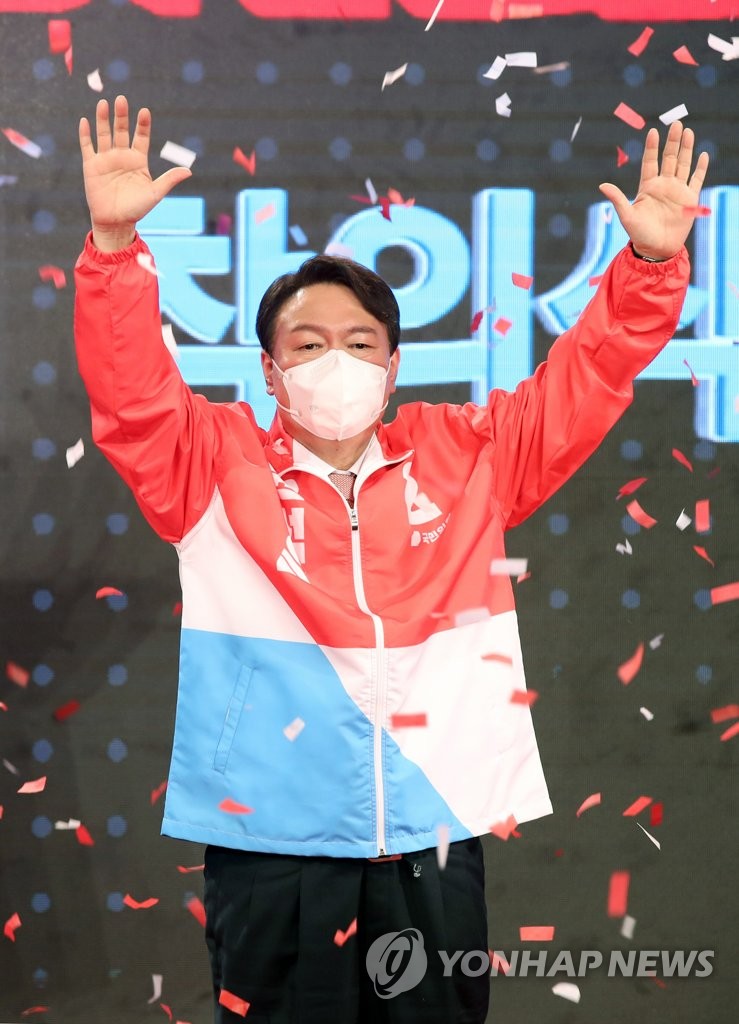 Yoon said he believes the people's will in summoning him into politics is that he correct the rampant injustices in society with fairness and without buckling to political pressures.

Taking a direct aim at Lee, who has been accused of involvement in a massive development corruption scandal, he said his "reason for being" is to uproot corrupt circles and reform the political establishment.

Lee congratulated Yoon on his nomination.

"Rather than engaging in a political fight, I hope we will compete in good faith over how to make people's lives better and how to make the country more hopeful," he told reporters while on a visit to the southeastern city of Daegu. 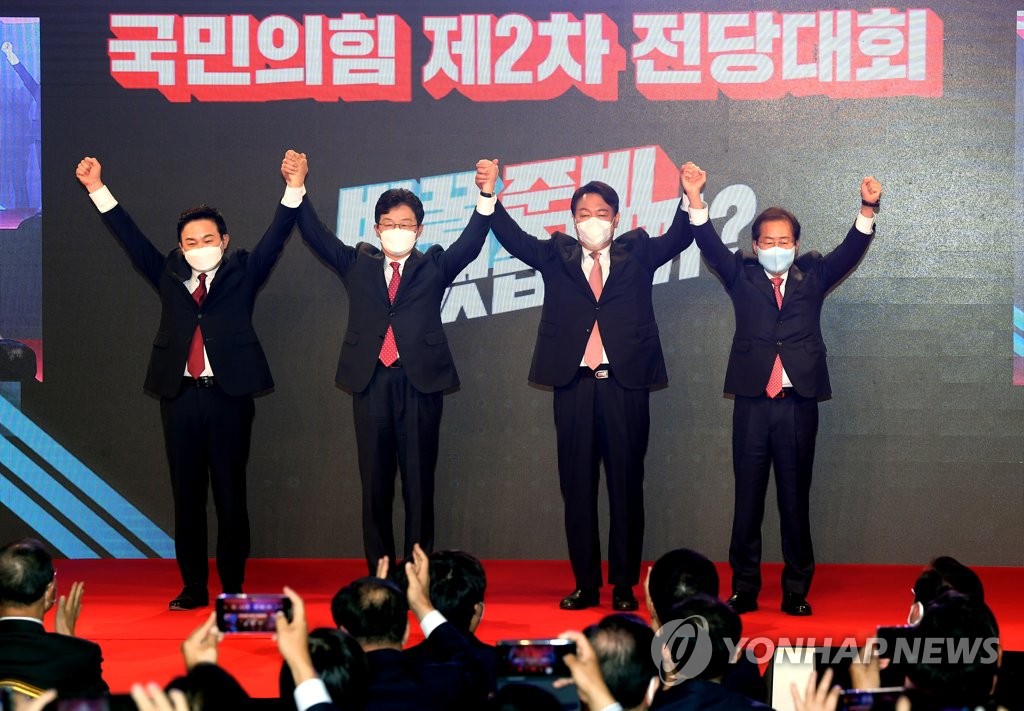 Critics say that Yoon has demonstrated a poor understanding of policy issues and stands little chance against Lee, who has years of experience running municipal and provincial affairs, and also ran for president in 2017.

Moreover, Yoon has raised eyebrows by making a series of gaffes and insensitive remarks that most recently drew the ire of voters in the southwestern Jeolla provinces, where the liberal ruling party has a stronghold.

Yoon's campaign pledges include increasing the housing supply to bring soaring housing prices under control and various measures aimed at providing "fair" education and other opportunities to the youth.

In foreign policy, he has promised to strengthen South Korea-U.S. cooperation against North Korea's nuclear and missile threats, including through regular exercises of nuclear force deployment.

In a hypothetical multi-candidate race, Yoon had 35 percent support, followed by Lee with 30 percent, Ahn with 7 percent and Sim with 6 percent, according to an opinion poll conducted Monday to Wednesday by Embrain Public, Kstat Research, Korea Research and Hankook Research.

The survey was conducted on 1,004 adults and had a margin of error of plus or minus 3.1 percentage points at a 95 percent confidence level. 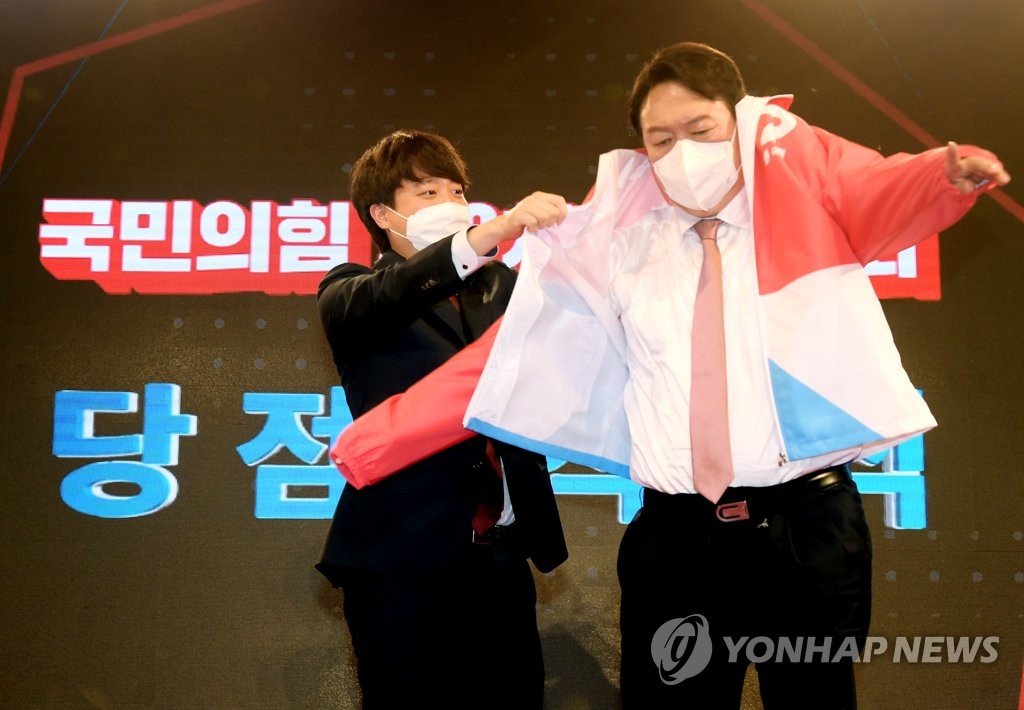