SEOUL, Nov. 5 (Yonhap) -- Prosecutors on Friday sought the death penalty again for a woman charged with abusing her adopted daughter to death in the appeals trial of the highly publicized case that shocked the country.

The prosecutors also requested the Seoul High Court ban the mother, surnamed Jang, from working at child-related facilities for 10 years, order her to wear a tracking device for 30 years and be put under probation for five years.

Jang was sentenced to life in prison in May for causing the death of her 16-month-old daughter, named Jung-in, by habitually abusing her for months last year.

On Oct. 13, 2020, Jung-in died of severe abdominal injuries and internal bleeding caused by "strong external force," apparently from her mother's abuse, according to an official autopsy. The death came less than a year after she was adopted. 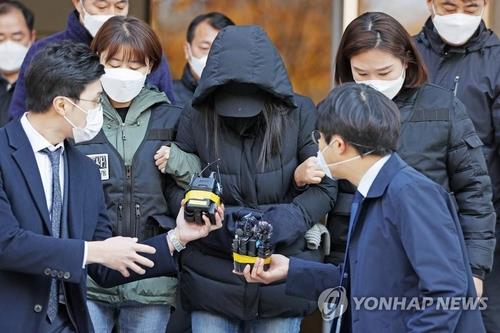 "It looks like the adoptive mother stamped on the victim's abdomen," the lower court had said, convicting her of murder. "She could have predicted that impacting another blow to the victim's already damaged abdomen could lead to her death."

The accused has claimed during court hearings she had no intention to kill Jung-in, though she admitted to abusing her.

The prosecutors, however, said the life sentence is too lenient, considering the frequency, result and gravity of the abuse committed against a 16-month-old toddler who could not protect herself.

For Jang's husband, prosecutors upheld their 7 1/2-year imprisonment demand. The husband, surnamed Ahn, was sentenced to five years in prison by the lower court on charges of aiding and abetting the abuse, as well as taking part in them.

The high court will deliver sentences for the couple on Nov. 26. 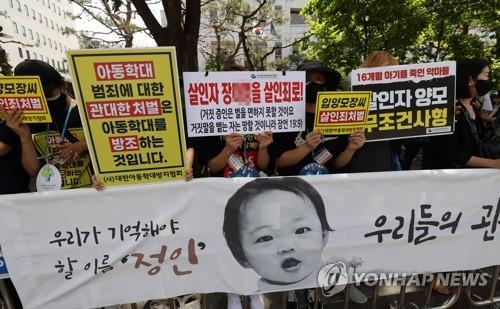 In a similar case, prosecutors on Friday demanded life imprisonment for a man on charges of beating his 2-year-old adoptive daughter to death.

The father was indicted on allegations that he abused the girl multiple times for being disobedient using his hands, a wooden back scratcher and a wooden shoehorn at his home in Hwaseong, about 40 kilometers south of Seoul, between the middle of April to early May.

The girl was in a coma for nearly a month after her father abused her to the point that she fell unconscious with bleeding in her brain on May 8. She was belatedly transported to a hospital but died on July 11.

For the man's wife, prosecutors sought 10 years in prison on charges of child abuse resulting in death for allegedly abandoning her even though she was aware of the abnormality in the girl's condition.