"Is it right for the people of a well-off nation to be poor?" Lee said in a Facebook posting, after his opposition rival, Yoon Seok-youl of the People Power Party, voiced opposition to offering universal relief grants.

"The real gross domestic product (GDP) of the third quarter rose about 8 trillion won compared with the end of 2019 right before the pandemic, but household consumption expenditures dropped by more than 5.3 trillion won," Lee said.

"This means that the country is getting richer, but people are closing their wallets," he said. "In addition, excess tax revenue this year is expected to amount to about 40 trillion won, which means the government warehouse is filling up."

In recent weeks, Lee has said the government should dole out additional cash handouts to all people, claiming the relief amount is too small considering the nation's GDP and in comparison with other countries.

But the government showed a negative reaction to Lee's calls.

Prime Minister Kim said last week the government cannot afford another round of universal COVID-19 relief grants, emphasizing the most urgent task for now is to compensate the self-employed and small business owners suffering from the pandemic. 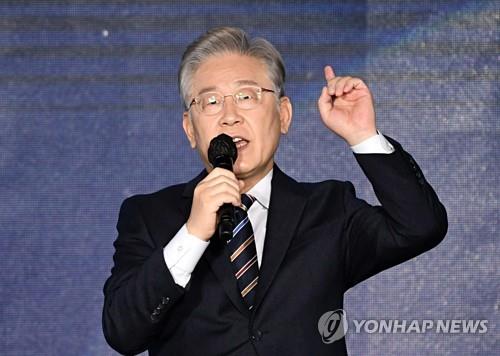