SEOUL, Nov. 8 (Yonhap) -- Yoon Seok-youl, the presidential nominee of the main opposition People Power Party (PPP), has said he is open to meeting with North Korean leader Kim Jong-un for a summit but is not interested in doing it "for show."

Yoon made the remark during an interview with Yonhap News Agency on Sunday, saying a summit should be held when it is expected to lead to concrete results.

"I will always leave it open, but I won't do it for show," Yoon said when asked about the possibility of an inter-Korean summit in the event he is elected president on March 9.

"Doing something for show ahead of local elections doesn't suit me. If you're not honest, it's bound to show soon. When you can fully expect there to be actual progress, then you can have a summit," he said. 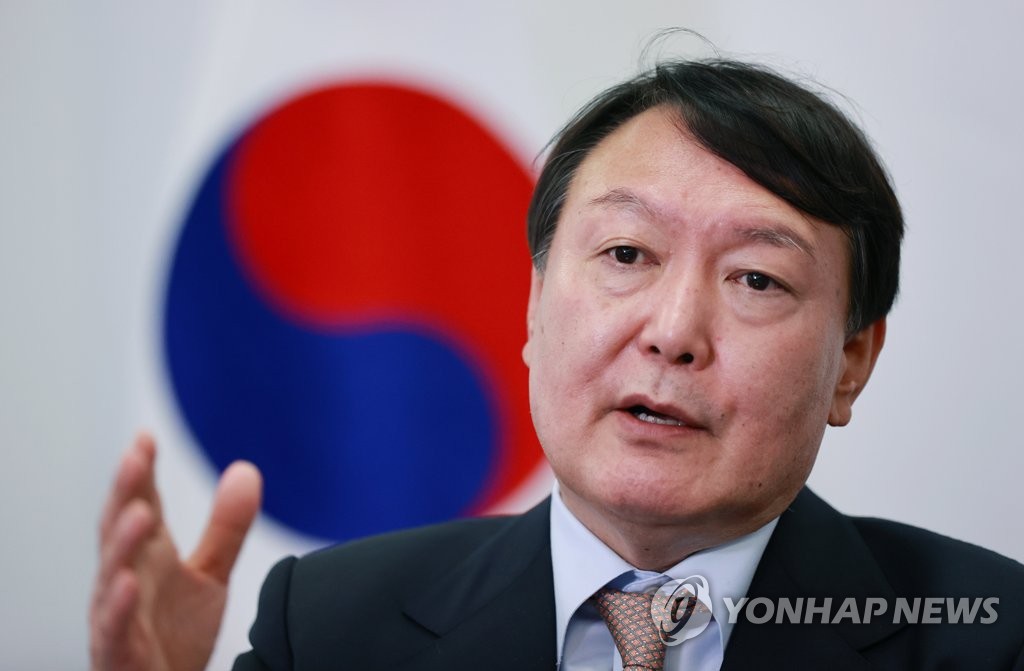 Yoon, a former prosecutor general under President Moon Jae-in, accused the current administration of having "no commitment" to denuclearizing North Korea.

Yoon has previously said he would ask the United States to redeploy tactical nuclear weapons or agree to a nuclear-sharing deal if South Korea's security was threatened by North Korea's nuclear and missile threats.

He made clear during the interview, however, that such a request is "unrealistic."

"The United States' firm policy is that it will not deploy nuclear forces to our country," he said. "We are able to use and share the U.S.' surveillance and reconnaissance assets for the early detection of North Korea's nuclear and missile (tests) ... these will be able to play a considerable role in keeping North Korea's nuclear (threats) in check."

Yoon still acknowledged the need to continue communication and exchanges, such as between families separated by the 1950-53 Korean War and between young people in the South and the North, that will help "slowly transform" North Korea.

"In the case of humanitarian aid, the medicine and food have to be such that they aren't diverted for military use," he said.

On the economy, Yoon pledged to launch a 100-day COVID-19 emergency rescue plan once he takes office.

The program will look at the extent of damage business owners have suffered under the government's COVID-19 restrictions and quantify the results by region, industry and type of restriction.

The new administration would then provide necessary financial assistance in the form of loans, rent and lower utility bills.

"If we do not pull the small business owners up from over the cliff, there will be a continued burden on the welfare budget," Yoon said. "We have to quickly come up with the financial resources by convincing the National Assembly, be it through an extra budget or the issuance of government bonds."

Yoon also said the government should spend the money "at once," rather than in stages, in order to achieve economic recovery.

Yoon says he is open to inter-Korean summit, but not 'for show'

Yoon says he is open to inter-Korean summit, but not 'for show'