SEOUL, Nov. 8 (Yonhap) -- President Moon Jae-in on Monday instructed aides to mobilize all possible measures to stabilize a supply of urea water solution amid growing public concerns about a worsening shortage of the key material used in diesel vehicles to reduce emissions due to tightened imports.

South Korea has been grappling with a shortage of urea water solution, known as diesel exhaust fluid, and its surging prices in recent weeks, since China tightened exports of fertilizers and related materials, including urea, in October amid a power crisis caused by a coal supply shortage.

The country heavily relies on China for its supply of urea water solution, as 97.6 percent of its import came from China in the first nine months of this year. 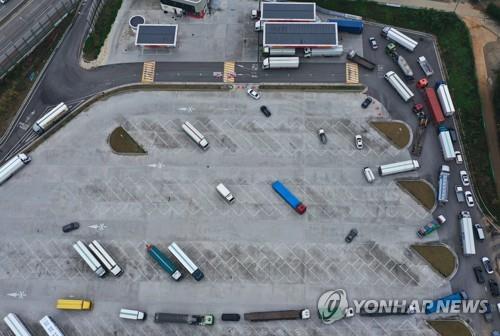 The government has faced growing criticism it belatedly took steps to cope with the shortage of the key component of diesel exhaust fluid.

Asked about such criticism by a lawmaker during a National Assembly meeting, Prime Minister Kim Boo-kyum said the government is deeply sorry about the shortage and will spare no effort to diversify imports of urea in accordance with contingency plans.

For fire-fighting and medical vehicles, the government has kept two or three months of supply on hand, Kim said.

On Sunday, the government decided to mobilize military aircraft to bring 20,000 liters of urea water solution from Australia.

Finance Minister Hong Nam-ki told the National Assembly meeting the government has been in talks with about 10 nations to import more urea water solution.