Ned Price, however, declined to comment on whether the U.S. agrees with a Seoul-proposed declaration of an end to the Korean War.

"We see eye to eye with our South Korean counterparts that achieving a complete denuclearization and lasting peace on the Korean Peninsula through dialogue and diplomacy is the best and the most effective course," he said when asked if Assistant Secretary of State for East Asian and Pacific Affairs Daniel Kritenbrink would seek to discuss a possible difference between South Korea and the U.S. over an end of war declaration during his upcoming trip to Seoul. 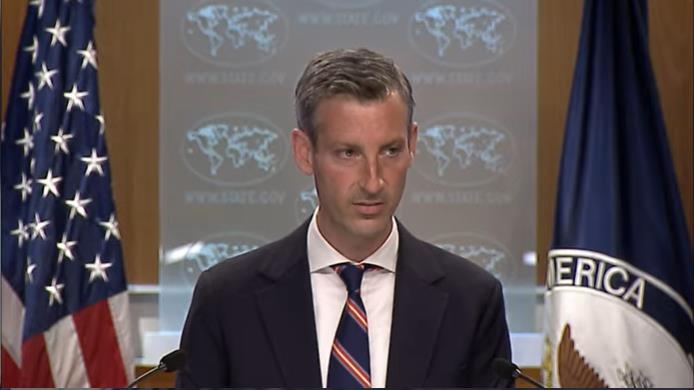 Kritenbrink is set to visit South Korea from Wednesday, following his ongoing trip to Japan that began earlier this week.

U.S. National Security Advisor Jake Sullivan earlier hinted at a possible difference between Seoul and Washington over an end of war declaration.

"We may have somewhat different perspectives on the precise sequence or timing or conditions for different steps. but we are fundamentally aligned on the core strategic initiative here and on the belief that only through diplomacy are we going to really, truly be able to effectively make progress," Sullivan said late last month.

Seoul insists declaring a formal end to the 1950-53 Korean War may help bring North Korea back to the dialogue table by offering some security assurances to the reclusive state.

Pyongyang has stayed away from denuclearization negotiations since 2019. It is also ignoring all U.S. overtures for dialogue, accusing the U.S. of harboring what it claims to be a hostile intent toward its regime.

"We will continue to seek engagement with the DPRK as part of what we've called a calibrated and practical approach in order to make tangible progress that increases security not only for the United States, but also for our regional allies," said Price, referring to North Korea by its official name, the Democratic People's Republic of Korea.

He also declined to comment directly when asked if topics of Kritenbrink's talks with his South Korean counterparts in Seoul would include an end of war declaration.

"I would suspect that the threat that is posed by the DPRK's ballistic missile and nuclear program will certainly be on the table, as will our strategy to advance the prospects for the complete and total denuclearization of the Korean Peninsula," said Price.

"But our relationship with the ROK, our treaty ally, is broad and it's deep, so there will be a number of issues that they will discuss together," he added.