SEOUL, Nov. 9 (Yonhap) -- South Korea's Navy has unveiled a three-dimensional rendering of an envisioned light aircraft carrier in a show of its resolve to build the warship by 2033 amid lingering doubts over its feasibility and necessity.

After five months of preparations, the Navy posted the six-minute clip depicting the carrier strike group on its YouTube channel Monday as part of an annual program to mark the 76th anniversary of its founding, which falls on Thursday.

The clip shows the 30,000-ton carrier operating at sea in tandem with other core components of its strike group, including an Aegis-equipped destroyer, combat support ship and submarine. Vertical take-off and landing fighters are also seen aboard the carrier

The Navy has been pushing for the carrier project, saying it will enhance its naval defense capabilities in a region surrounded by major maritime powers, such as China and Japan.

Critics, however, often describe aircraft carriers as "floating coffins," as they can be easily exposed to advanced anti-ship weapons and torpedoes. They say the Navy should instead focus on more effective assets for underwater operations.

Brushing aside such criticism, Chief of Naval Operations Adm. Boo Suk-jong said during a parliamentary audit last month the Navy will carry out the project "no matter what challenge lies ahead."

The estimated cost for the planned light aircraft carrier is 2 trillion won (US$1.68 billion), according to the Navy. The defense ministry allocated 7.2 billion won for next year as the first step of the program.

From Thursday through Sunday, the Navy plans to hold a series of events to mark the founding anniversary. They include a maritime sports competition and a musical performance. 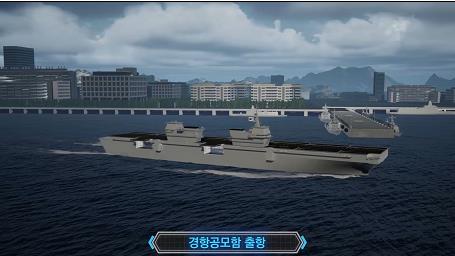