The letter was also sent to Secretary of State Antony Blinken, according to the Korean American Public Action Committee (KAPAC).

"We wish to highlight the importance of the United States continuing its efforts to facilitate peace between South Korea and North Korea and bring about democracy for all residents of the Korean Peninsula," says the letter, released by the KAPAC.

The letter, dated Nov. 4, was signed by Rep. Brad Sherman (D-CA) and 22 other lawmakers here, according to the KAPAC.

The lawmakers note South Korean President Moon Jae-in renewed his proposal to declare a formal end to the Korean War in his address to the U.N. General Assembly this year.

"To that end, we urge the Administration and the Secretary of State to prioritize active diplomatic engagement with North Korea and South Korea with the goal of a binding peace agreement constituting a formal and final end to the state of war between North Korea, South Korea, and the United States."

The divided Koreas technically remain at war, as the 1950-53 war ended only with an armistice.

Seoul believes declaring a formal end to the war may help restart denuclearization negotiations with North Korea, which have stalled since 2019.

U.S. National Security Advisor Jake Sullivan, however, has hinted at a possible difference between Seoul and Washington over when an end of war declaration should be made.

"We may have somewhat different perspectives on the precise sequence or timing or conditions for different steps," he said late last month when asked if the U.S. supported Seoul's proposal for a war's end declaration. 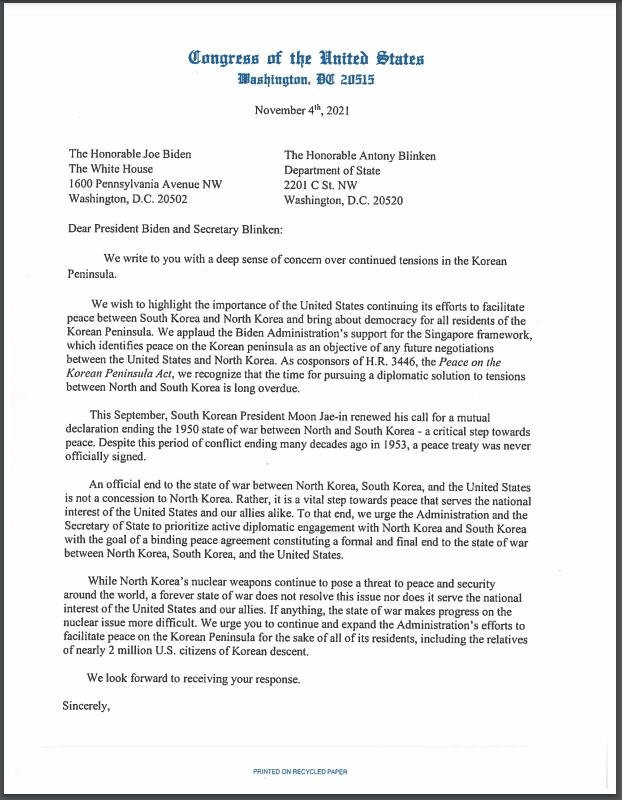