SEOUL, Nov. 9 (Yonhap) -- South Korea is closely monitoring signs of North Korea's reopening of its border long closed due to the coronavirus, a unification ministry official said Tuesday, amid reports a train in operation was spotted in the region bordering China.

Local media broadcast footage of a train crossing the bridge over the Amnok River connecting Sinuiju in North Korea to the Chinese port city of Dandong on Monday, saying it appears to be a test operation ahead of an imminent border reopening.

Yet, Seoul's unification ministry remained cautious to say whether the train in the footage actually ran from the North to China.

"The government has been closely monitoring related moves on the basis of the assessment that the preparations to resume train operations between North Korea and China are in their final stage," the official told reporters on background. "But it's hard to predict exactly when the operations will resume as consultations between North Korea and China should be wrapped up first."

The official said the government will continue monitoring other signs before making a conclusion on the North's reopening of its land routes.

South Korea's National Intelligence Service said last month the North was in talks with China and Russia to resume train operations across the border and those connecting Sinuiju and Dandong could resume as early as in November.

The North has recently reopened its sea routes to receive international organizations' medical supplies and other goods necessary for its citizens, following the prolonged lockdown, which is believed to have taken a toll on its economy already hit by crippling sanctions. 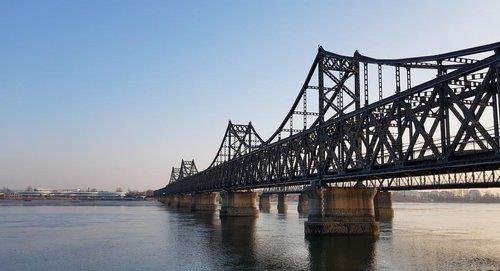