DAEGU, Nov. 9 (Yonhap) -- Riding relentless bats and a rock solid bullpen, the Doosan Bears defeated the Samsung Lions 6-4 on Tuesday to claim the opening game of the penultimate series in the South Korean baseball postseason.

Hong Geon-hui threw three strong innings out of the bullpen for a relief win, and his batterymate Park Sei-hyok blasted his first career postseason home run for insurance in the ninth.

The Lions wasted two bases-loaded opportunities in the loss.

Game 2 of this best-of-three series will be 6:30 p.m. Wednesday at the Bears' home, Jamsil Baseball Stadium.

The winner of this round will meet the KT Wiz in the Korean Series, which starts Sunday. The Wiz earned the bye to the championship round after posting the best regular season record.

The Bears are trying to reach a record seventh consecutive Korean Series. The Lions are looking for their first trip there since 2015. 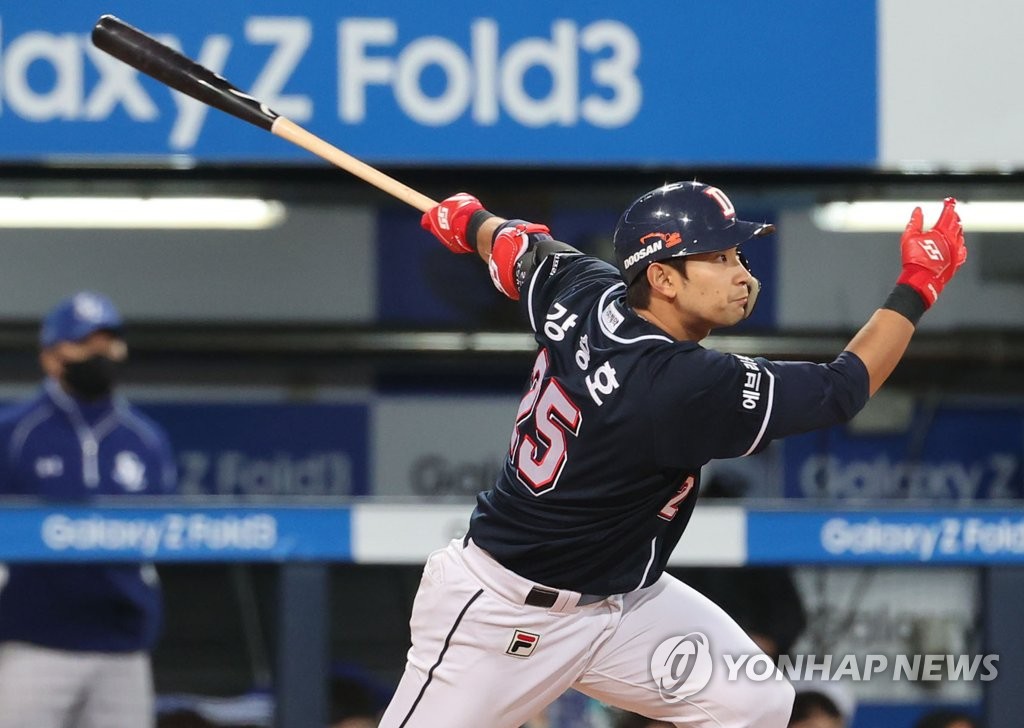 The Lions wasted little time getting on the board. With one out in the bottom first, No. 2 hitter Kim Ji-chan drew a four-pitch walk from starter Choi Won-joon, and the next batter, Koo Ja-wook, drove the first pitch he saw into the right-center gap for an RBI double.

Choi got the second out, but then walked Oh Jae-il on four pitches. Jose Pirela then smacked a double to deep left field for a 2-0 Lions lead.

But the Bears immediately jumped ahead with three runs in the top of the second against starter David Buchanan. 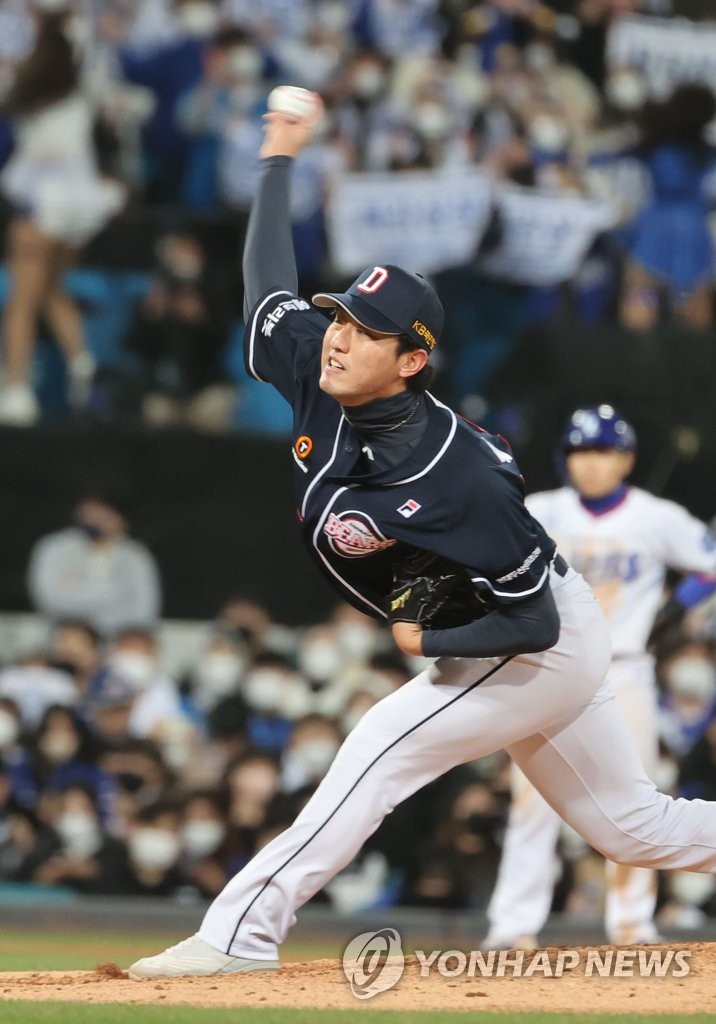 They loaded the bases on two hits and a walk. At two outs, No. 9 hitter Kang Seung-ho tied the score at 2-2 with a single up the middle.

The Bears took a 3-2 lead when third baseman Lee Won-suk let a grounder by Jung Soo-bin go off his right foot and roll into foul territory. Park Gye-beom came around from second for the go-ahead run.

After some early fireworks, both starters settled down. Following the chaotic second inning, Buchanan held the Bears to one hit over the next three frames. Choi pitched around a two-out triple in the bottom second and put up zeroes again in the third and fourth innings.

But Choi got himself into a jam in the bottom fifth, giving up a single and a walk and then hitting a batter to load the bases before getting the hook.

The Bears summoned Hong Geon-hui from the bullpen, and the right-hander got slugger Oh Jae-il to bounce into a rally-killing, 4-6-3 double play. 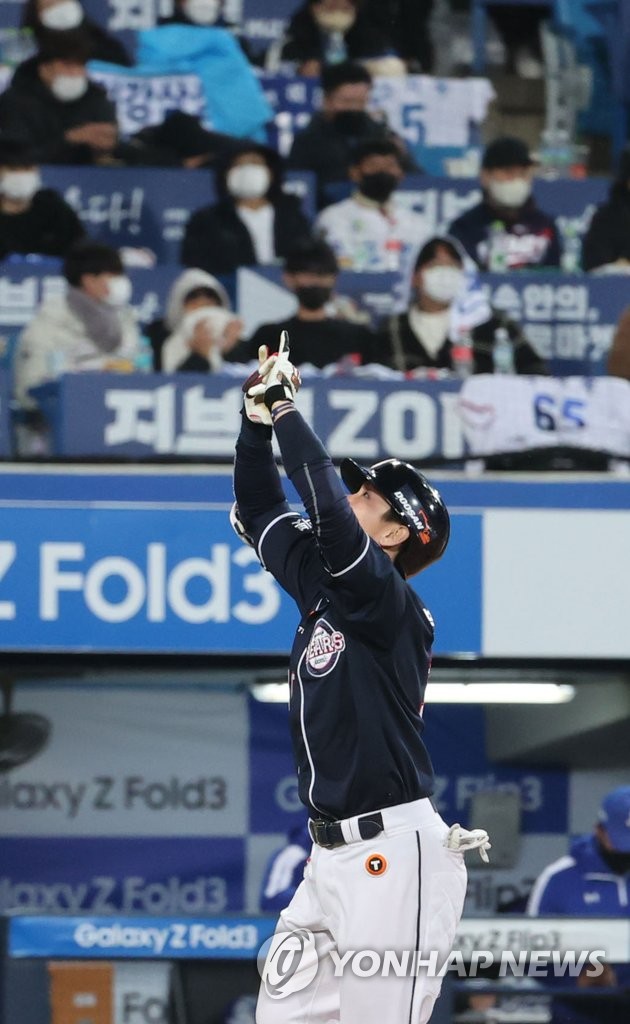 Buchanan did his part to keep the Lions in the game and had a scoreless sixth on nine pitches.

But the Lions wasted another bases-loaded opportunity in the bottom sixth.

After one out, they packed the bases with two singles and an error, with the top of the order due up. But Park Hae-min chopped one back to first baseman Yang Suk-hwan, who easily threw out the runner at the plate. Kim Ji-chan then flied out to left field to let Hong off the hook.

Buchanan was done after seven strong innings, and the Bears immediately scored an insurance run in the top eighth after putting runners at the corners against new pitcher, Mike Montgomery.

It wasn't pretty, with Jung Soo-bin scoring from third on a 6-4-3 double play ball by Park Kun-woo.

The Lions had another promising rally fall flat in the eighth inning. Jose Pirela led off with a double, and a walk followed by a sacrifice bunt put tying runs aboard for Kang Han-wool. 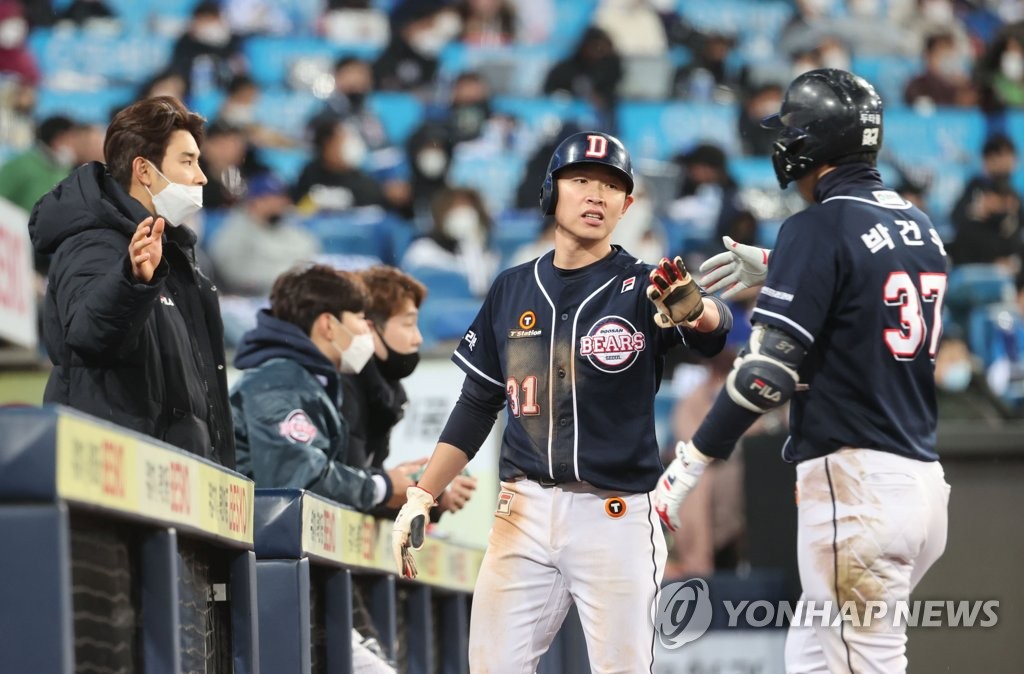 But the best Kang could manage against new pitcher Lee Hyun-seung was a groundball to second that only brought Pirela home to make it a 4-3 game. Park Hae-min then struck out to end the inning.

A tight contest took an unexpected twist in the top ninth. With two outs, the Lions brought in closer Oh Seung-hwan, apparently to keep it a one-run game and set the stage for a potential comeback in the bottom ninth.

But Park Sei-hyok greeted Oh with a towering solo home run to right field that made it a 5-3 game. Oh then surrendered three consecutive hits, the last being an RBI double by Jung Soo-bin.

Koo Ja-wook hit a solo shot off closer Kim Kang-ryul with one out in the bottom ninth, but the gap had grown too large for the Lions to overcome. 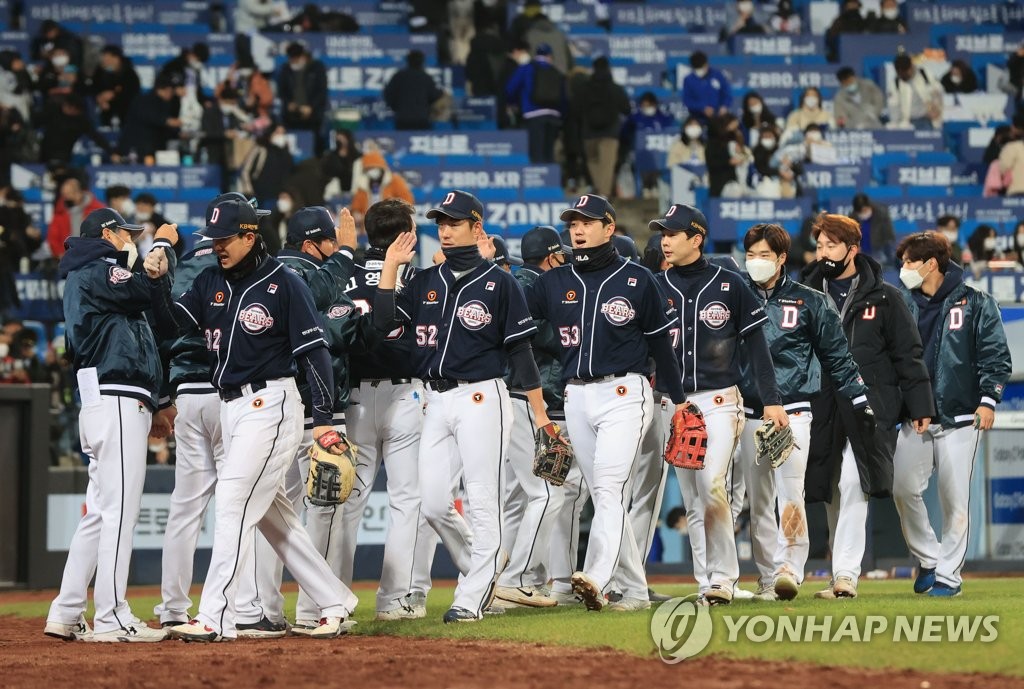 Doosan skipper Kim Tae-hyoung said he felt luck was on his side, with some hard-hit balls by the Lions going straight to Bears infielders for double plays.

The Bears' top right-handed reliever, Lee Young-ha, was unavailable after tossing 66 pitches on Sunday to clinch the previous series against the LG Twins. Kim said he had to ride Hong as long as possible.

"If Hong Geon-hui had been knocked around, we would have been cooked," Kim said. "We thought about keeping him through the eighth inning, but his arm looked a little heavy. But Hong pitched really well, and Lee Hyun-seung also gave it all he had."

The Bears will try to finish off the Lions Wednesday with right-hander Kim Min-gyu on the mound. Kim started the clinching game of the previous series on Sunday, though he only threw 30 pitches in one inning of work.

Kim's regular season numbers against the Lions are more concerning. He served up 13 runs on 14 hits, including three home runs, in just 5 1/3 innings against them.

The Lions will count on left-hander Baek Jung-hyun to keep their season alive. Baek led the club with a 2.63 ERA in the regular season, and had a 1-1 record with a 4.50 ERA in three meetings versus the Bears.

Samsung manager Huh Sam-young said Baek will be on a short leash and another starter, Won Tae-in, will likely be the first one out of the bullpen if necessary.