(ATTN: UPDATES with Lee's remarks on U.S. forces, other issues from para 10)
By Lee Haye-ah

SEOUL, Nov. 10 (Yonhap) -- Ruling party presidential candidate Lee Jae-myung said Wednesday he is open to an independent counsel investigation into a massive corruption scandal implicating one of his former aides.

Lee of the ruling Democratic Party has previously rejected the main opposition People Power Party's calls for a special counsel probe into allegations that the former aide colluded with a private investor to reap astronomical profits from an apartment development project undertaken in Seongnam, south of Seoul, in 2015, when Lee was the city's mayor. 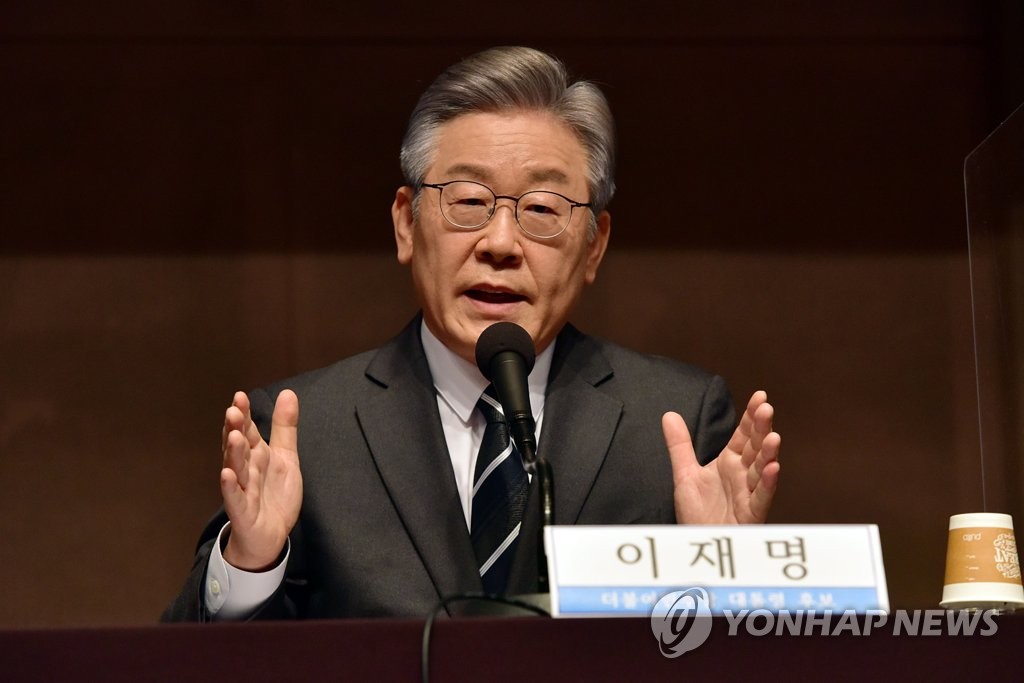 "I believe we need to see the prosecution's investigation first because it is being done by a state organization," the former governor of Gyeonggi Province said during a forum organized by the Kwanhun Club, an association of senior journalists.

"But if it leaves any loose ends or questions, it will require a more perfect and thorough determination of the truth and strict demands of accountability, be it through a special counsel or in whatever form, and on that point, I fully agree," he said.

The PPP believes Lee was behind the corrupt scheme that awarded a little known asset management company 1,000 times the amount it invested in the development project and has accused the prosecution of dragging its feet for political reasons.

Lee has denied involvement in the actual scandal and apologized only for appointing some "polluted" people during his time as mayor.

"I believe that corruption should be handled strictly and have practiced that point myself for a long time," he said.

Lee also accused his opponent and PPP presidential candidate Yoon Seok-youl of turning a blind eye to some of the alleged illegal transactions that occurred at the start of the development project while previously serving as a lead investigator for a separate case.

"This should also be subject to an investigation, and if that's not enough, it too should be investigated by a special counsel," he said.

During the discussion, Lee also characterized U.S. troops, which entered the Korean Peninsula right after Korea's 1945 liberation from Japan's colonial rule, as "occupation forces," repeating an earlier remark that drew fire from conservatives.

In July, Lee first used the expression, saying that pro-Japan forces in the country maintained their ruling system in collaboration with U.S. "occupation forces" after the liberation, sparking criticism that he disparaged the nation's only ally.

Lee claimed at the time there is technically nothing wrong with the expression, saying the U.S. troops at the time called themselves as such.

On Wednesday, Lee stuck to the characterization, stressing that even though the American forces were occupation forces at the time, their presence after the 1948 establishment of South Korea's government should be characterized as "allied forces."

"Their objective true nature was of occupation forces," Lee said. "The nature of U.S. Forces Korea has been completely different depending on the point in time."

The U.S. currently stations some 28,500 troops in South Korea as a legacy of the 1950-53 Korean War that ended in an armistice, not a peace treaty.

Lee told the forum that he believes the public consensus is against maintaining the current system that supports U.S. national and military interests, and gives operational control of the allied forces to Washington.

"We need an early transfer of wartime operational control (to Seoul)," he said.

The nominee addressed his earlier opposition to the deployment of the U.S. missile defense system, THAAD, in South Korea during the 2017 presidential race when he ran against current President Moon Jae-in in the primary.

"In principle, I can't agree that it is fully in accordance with our national interests in East Asia, but because it has been deployed, I can't oppose the THAAD deployment now and call for its removal," Lee said. "Additional deployments need to be reviewed carefully and shouldn't happen, but we have to accept the THAAD unit that has been deployed and find possible solutions on that premise."

Lee expressed his opposition to the notion of a trilateral alliance involving South Korea, the U.S. and Japan, saying it is a matter that has to be looked into "very carefully."

He said a trilateral alliance could be "very dangerous" as long as Japan continues to lay claim to South Korea's easternmost islets of Dokdo and questions persist about Tokyo's imperialist motives.

On his approach to North Korea, Lee described it is "an economic issue at its core."