SEOUL, Nov. 11 (Yonhap) -- Throughout the more than two decades of his filmmaking career, director Kim Jee-woon has boasted of his chameleonic cinematic talents in making genre-hybrid pieces since his directorial debut, "The Quiet Family" (1998).

Kim has chosen different eras, styles and genres, along with his signature visual storytelling based on smooth camerawork and rich set designs in the psychological horror-drama "A Tale of Two Sisters" (2003), the Western action film "The Good, the Bad, the Weird" (2010), the period action thriller "The Age of Shadows" (2016) and the sci-fi action film "Illang: The Wolf Brigade" (2018).

He even went to Hollywood and directed an English language film, working with famous American star Arnold Schwarzenegger in the action thriller "The Last Stand" (2013). This time, the 57-year old director took on a completely new challenge for his first project in three years. Instead of directing a two-hour film for a theatrical release, he took the helm of a six-episode TV series on an online streaming platform: "Dr. Brain," the first Korean-language original of Apple TV+.

"When I was younger, I thought films and TV series are quite opposite, as there were some limitations on TV for creators," Kim said in a media interview held online Wednesday. "But the situation has changed a lot, and we are facing a big new room."

Based on the popular namesake webtoon, "Dr. Brain" revolves around Sewon (Lee Sun-kyun), a genius cerebral scientist who is obsessed with figuring out new technologies to access the consciousness and memories of the brain.

After losing his family in mysterious circumstances, the cold-hearted and impassive scientist tries to link the brains of people involved in the events and collects their memories to get closer to the truth.

The prolific director said he was so impressed and excited by the brain sync in the original he thought it was the right time to cross the line drawn between film and TV.

"When I first got the offer for this project, I wanted to make a film," he said. "But to tell a deeper and richer story of the creative idea, I decided to produce a TV series."

Kim said he wanted to expand the story of the scientist's brain experiments and investigations to his emotional journey and growth as a husband and a father.

"To adapt this web comic into a six-hour TV series, I added more layers of Sewon's relationship and his efforts to fill the emotional deficiency," he said. "This process of building a longer narrative is quite different from making a film."

Still, it was not easy for the veteran film director to adjust the tight shooting schedule of a TV series in South Korea, where the so-called "live-shot" dramas had prevailed, with filming, editing and airing taking place on a real-time basis.

"In the past I had to make a two-hour film within a given time span," he said. "Now, I have the same time frame, but I have to make a six-hour series. What pressure."

And for Kim, a rookie TV production director, making the cliffhanger ending to keep an audience hooked for the next episode is also unheard of. "Dr. Brain" is released one episode at a time on a weekly basis, like a conventional TV show.

"I had to complete a full story for each episode, and at the same time, I had to focus on the last scenes of each episode to maintain the tension," he said. "Many things were different from filmmaking procedures. But it was fresh and interesting, as difficult and strange as I felt during this project." 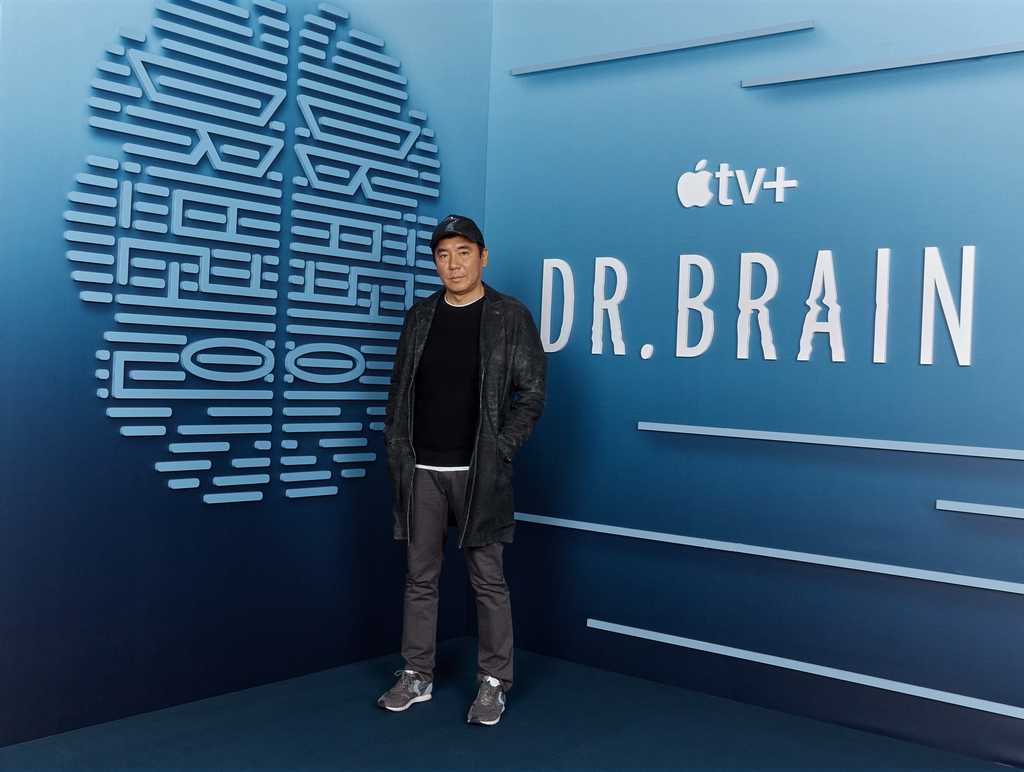 He hoped his first TV series will contribute to the recent global boom of Korean content stemming from the Oscar-winning "Parasite," the Netflix phenomenon "Squid Game" and K-pop sensation BTS.

"All first things become worthwhile when they survive for a long time," he said. "I want to hear others saying they are curious to know more about Korean content because of 'Dr. Brain.'"

The first episode of "Dr. Brain" was unveiled last week on Apple TV+, with its next episode slated for this Saturday.