SEOUL, Nov. 11 (Yonhap) -- Ruling party presidential candidate Lee Jae-myung met with the top U.S. diplomat for East Asia on Thursday and expressed his hope to develop the alliance between the two countries into a global partnership.

Lee and U.S. Assistant Secretary of State for East Asian and Pacific Affairs Daniel Kritenbrink held talks at the Democratic Party's headquarters as part of the U.S. official's three-day visit to Seoul.

Kritenbrink is also reportedly planning a meeting with the main opposition presidential candidate Yoon Seok-youl of the People Power Party later this week as Washington seeks to build relations with Seoul's next potential leaders ahead of the March 9 presidential election. 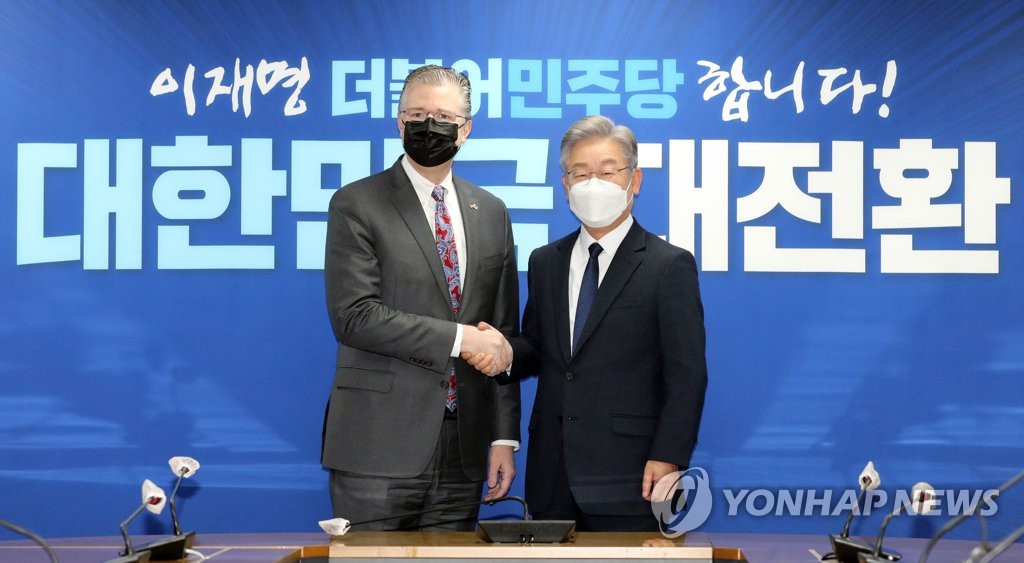 "I hope the South Korea-U.S. alliance will continue to grow and develop into an economic alliance and a global partnership," Lee said at the meeting.

Thanking the U.S. government for its past economic and military assistance, Lee said it is "meaningful" South Korea's democracy and economy have risen to a globally recognized level through its decadeslong alliance with the U.S.

Kritenbrink, who is on his first visit to Seoul since taking office in September, said his sole purpose is to demonstrate how much importance Washington places on the region.

He also said Washington has faith in the strong bilateral alliance and will continue to support Seoul's growth into a global partner.

The assistant secretary was accompanied at the meeting by Christopher Del Corso, charge d'affaires ad interim at the U.S. Embassy in Seoul.