Presales of the album reached 700,000 units, about 200,000 more than its previous release and last EP "Taste of Love," according to JYP Entertainment.

The group said the name "Formula of Love: O+T=<3" expressed the group's relationship with its fandom ONCE in the form of a simple math equation using the initials of the fandom and group names and a love emoticon.

The full album consists of 17 tracks, including a song written and composed for the first time by member Jihyo.

The album's lead track is "Scientist," a song with the message that "Love is not complicated but is a clear thing."

"The song says that love is not something you can calculate, study and try to find an answer to but is something you should follow with your heart," Nayeon was quoted as saying in a press release from JYP. "I hope you get a bit of strength and energy while listening to our music." 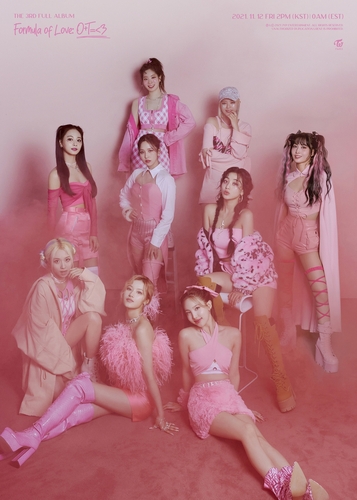