The meeting with U.S. Assistant Secretary of State for East Asian and Pacific Affairs Daniel Kritenbrink and U.S. Sen. Jon Ossoff (D-GA) was held at the People Power Party's headquarters as part of their separate visits to Seoul.

"I can't stress enough the importance of the South Korea-U.S. alliance, not only in terms of conventional national security, but in all areas from health and administration to climate agreements and advanced digital technologies," Yoon said. 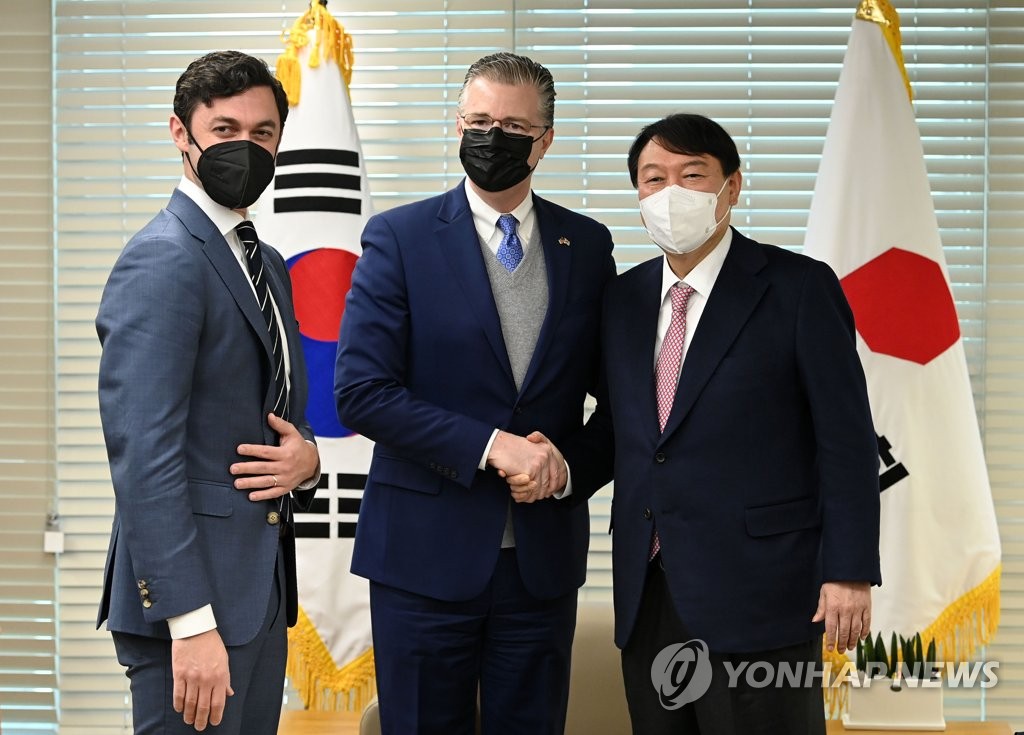 "A firm alliance between South Korea and the U.S. has become ever more important in global issues beyond national security, not only for the United States, but also for South Korea," he said.

Yoon of the conservative PPP went on to highlight his belief in the importance of "a rules-based international order" and "predictability in state-to-state diplomacy."

He also expressed his view that South Korea should be an active participant in efforts to build a global coalition of countries sharing the values of democracy and human rights, alongside the U.S.

Kritenbrink said he has emphasized the importance of regional alliances while working on Asia issues at the U.S. State Department.

He said there is no ally more important to the U.S. than South Korea and hopes his visit will serve to prove the strength of the alliance and expand its reach.

Ossoff, the youngest member of the Senate at 34, said the fact that he visited Seoul in his first year in office demonstrates the importance of the bilateral relationship.

He also said he has some knowledge of Korean history and culture and he believes U.S. policymakers should be well aware of the country's history.

He noted in particular he is a fan of the Korean drama "Mr. Sunshine."

The back-to-back meetings come as Washington seeks to build relations with Seoul's next potential leaders ahead of the March 9 presidential election.