(ATTN: UPDATES with additional remarks by Yoon)
By Lee Haye-ah

Yoon of the conservative People Power Party made the remark in response to a question about whether he supports additional THAAD deployments during a meeting with foreign correspondents in Seoul.

The remark could touch China's nerves, because Beijing has long opposed the THAAD deployment in South Korea, claiming the system could be used to hurt its security interests.

"Questions about how much further we will strengthen our missile defense system, including through THAAD, and work jointly with the United States and Japan, are a sovereign matter of our government that can certainly lead to an upgrade depending on the security situation," he said. "I will decide on that basis." 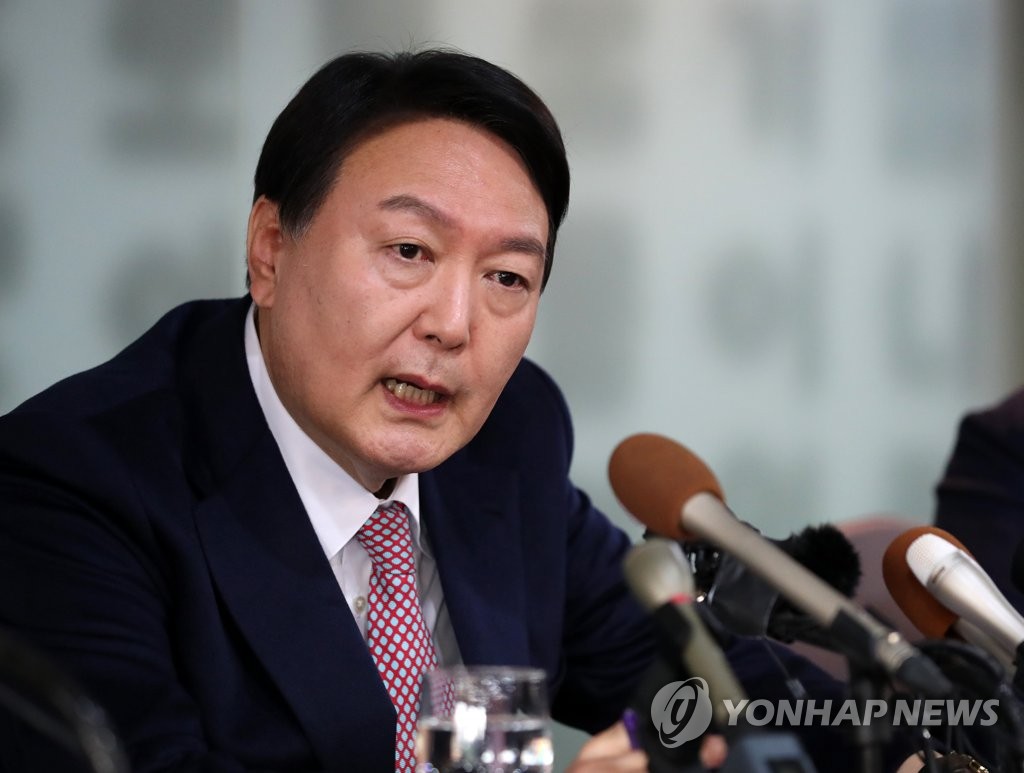 The Terminal High Altitude Area Defense system, or THAAD, was deployed to South Korea in 2017 to deter North Korea's nuclear and missile provocations despite Chinese objections over its potential threat to Beijing's national security.

China responded to the deployment by staging a massive economic retaliation campaign against Seoul.

The former prosecutor general said he believes South Korea should continue to participate as a working group member under the U.S.-led Quad security forum, which is widely viewed as a coalition against Beijing.

"To defend our security against North Korea's nuclear threats, we also need a cooperation regime with Five Eyes," he said, referring to a U.S.-led intelligence alliance.

Yoon stated his opposition to the Moon Jae-in administration's push to declare a formal end to the 1950-53 Korean War, saying he believes there could "considerable side effects" if it is done before the North's security threats are removed.

"In the event of a contingency, there could be serious problems for the Republic of Korea's security," he said.

Yoon pledged to open a "new era of cooperation" with China based on mutual respect and push for regular high-level strategic talks if elected on March 9.

"If the North Korean leadership decides to do so, I will activate economic assistance and cooperation projects in line with progress in denuclearization," he said, adding he will seek policies to open and reform the North through humanitarian aid and increasing broadcasts and communications.

He also promised to come up with a joint economic development plan to implement after North Korea's denuclearization.

"I will normalize inter-Korean relations that have been reduced to a master-servant relationship," Yoon said.

On relations with Japan, Yoon promised to seek a comprehensive solution to issues of history, trade and national security.

"I will design a new 50 years for South Korea-Japan relations marked by shared values and interests, and the creation of trust," he said.

When asked by a Russian reporter if he likes Russia, Yoon responded, "I love Tchaikovsky and Shostakovich very much."