SEOUL, Nov. 13 (Yonhap) -- The Korean Confederation of Trade Unions (KCTU), a major umbrella labor group, on Saturday pushed ahead with a rally of 20,000 members from across the country in Seoul despite the authorities' decision not to permit it.

The unionists gathered at an area near Dongdaemun market, which is symbolic of South Korea's labor movement as the site where late activist Chun Tae-il worked and burned himself to death in 1970 at age of 22 to protest horrific working conditions. Saturday marks the 51st anniversary of Chun's death.

Police launched a probe into the participants and organizers of the rally after it ended.

Police plan to call on key participants and organizers to appear for questioning over the rally on charges of violating COVID-19 rules and law on assembly and demonstration.

The organization originally planned to hold the rally at Gwanghwamun Square in the city center but abruptly changed the plan after the police blocked the area with buses to keep people from gathering for the rally.

The KCTU appears to have changed the plan after drawing unfavorable scrutiny through media attention to its plan to hold a large-scale rally at a major spot in the city center, such as Gwanghwamun Square, and as public opinion is largely opposed to such rallies amid the ongoing coronavirus pandemic.

The rally caused traffic congestion at the Dongdaemun Station intersection at one point as the police moved together with the protesters to the site. Protesters wore masks to prevent the spread of COVID-19, and there was no major clash between the two sides.

During the rally, the KCTU called for a full amendment of labor laws and better working conditions.

The KCTU had reported a plan to hold the rally at Gwanghaemun Square in 20 groups with 499 members each, keeping 70 meters apart from other groups. But the Seoul metropolitan government did not permit the rally, taking it as a single rally of 10,000 people to be held in the same place. 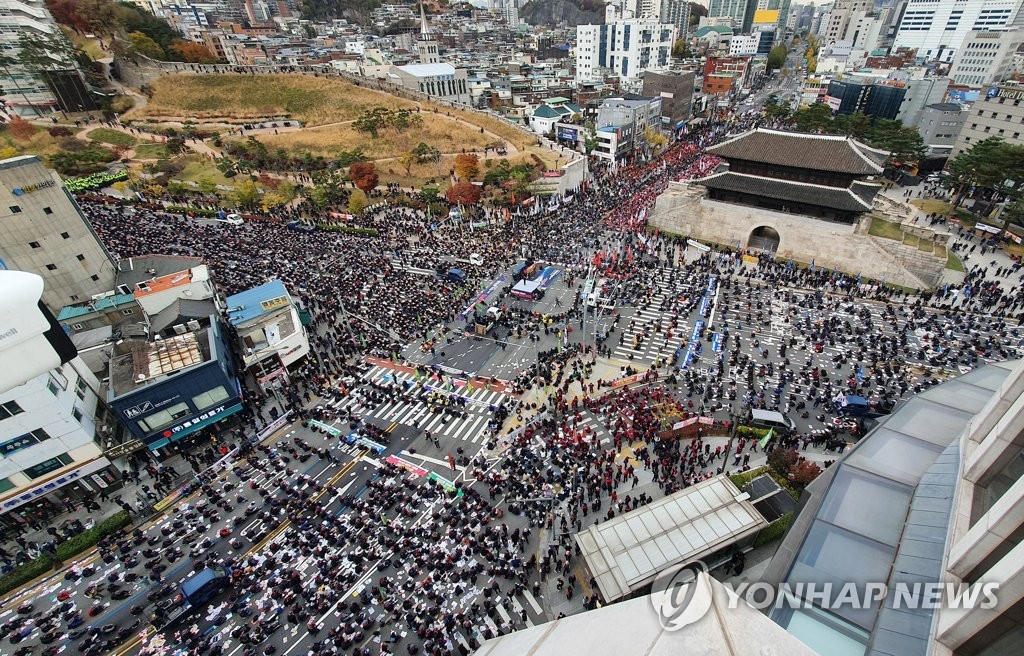