SEOUL, Nov. 15 (Yonhap) -- South Korea has the highest ratio of household debt to gross domestic product (GDP) among major economies in the world, a report showed Monday, indicating it could crimp consumption and weigh on the economy down the road.

The country's household debt stood at 104.2 percent of its GDP as of end-June this year, the highest among 37 economies, according to the report by the Institute of International Finance.

Hong Kong came next with 92 percent, followed by Britain with 89.4 percent, the United States with 79.2 percent, Thailand with 77.5 percent, Malaysia with 73.4 percent and Japan with 63.9 percent.

South Korea's ratio was up 6 percentage points from a year earlier, also the fastest growth rate. 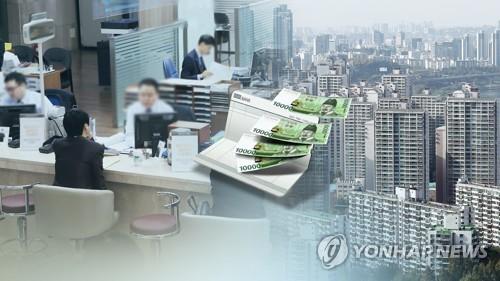 South Korea is the only country among those economies that has more household debt than its economic size.

South Korea is striving to rein in household debt, which has grown at a faster clip since 2020 amid nationwide efforts to stimulate the economy from the COVID-19 pandemic.

Household credit reached a record high of 1,805.9 trillion won (US$1.53 trillion) in June, up 41.2 trillion won from three months earlier, according to central bank data.

Household debt swelled 7.9 percent on-year in 2020, a faster growth pace than a 4.1 percent hike the previous year. The debt jumped 10.3 percent on-year during the second quarter of this year.

Analysts said households' debt service burden could rise down the road, weakening consumer consumption and becoming a drag on the recovery of Asia's fourth-largest economy.

The report also showed South Korean companies' debt ratio coming to 115 percent in the second quarter of the year, the fifth highest among those economies. Hong Kong had the highest ratio with 247 percent, trailed by China with 157.6 percent and Singapore with 139.3 percent.