SEOUL, Nov. 15 (Yonhap) -- A trio of veterans chasing their first South Korean baseball championship ring pushed the KT Wiz a step closer to the title on Monday, leaving their mark on a key victory with their glove, bat and, in one instance, an elbow guard.

The Wiz defeated the Doosan Bears 6-1 to take a 2-0 lead in the Korean Series at Gocheok Sky Dome in Seoul on Monday. Teams have won the first two games of the best-of-seven set 19 times prior to this year, and they were able to capture the title on 17 of those occasions. 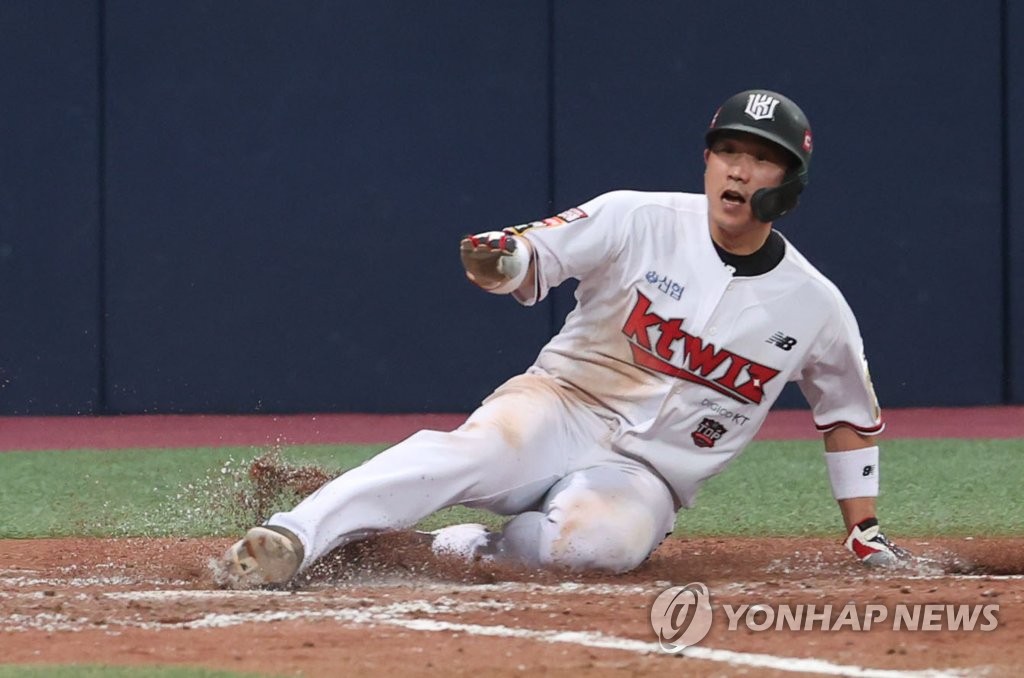 And if not for second baseman Park Kyung-su's spectacular play in the top of the first, the game might have played out very differently.

KT starter So Hyeong-jun, 20, couldn't find the zone early and walked the first two batters. Then Jose Miguel Fernandez sent a scorcher toward the hole on the right for a certain RBI hit.

But Park, a 37-year-old playing in his first Korean Series, had other ideas. The 19-year veteran laid out to his left to snatch the ball and threw out the lead runner from his knees to start a 4-6-3 double play. So issued another walk but escaped the inning unscathed.

Park was named the Player of the Game for his fielding -- he also had four putouts -- and quipped afterward he would have liked to have won it with his bat.

"I think I got this one for all the old guys on the team," Park said. "We had our youngest starter on today and some of the veterans got together and talked about how we should try to back him up."

Park said Fernandez's ball was hit so hard that he didn't think he'd be able to turn a double play with it.

"My back is aching now," Park said with a smile. "I have to get it treated. It's a little tight, but I have to do whatever it takes to win these games."

In the bottom first, Wiz captain and No. 2 hitter Hwang Jae-gyun blasted a solo home run off starter Choi Won-joon to give the Wiz a 1-0 lead. 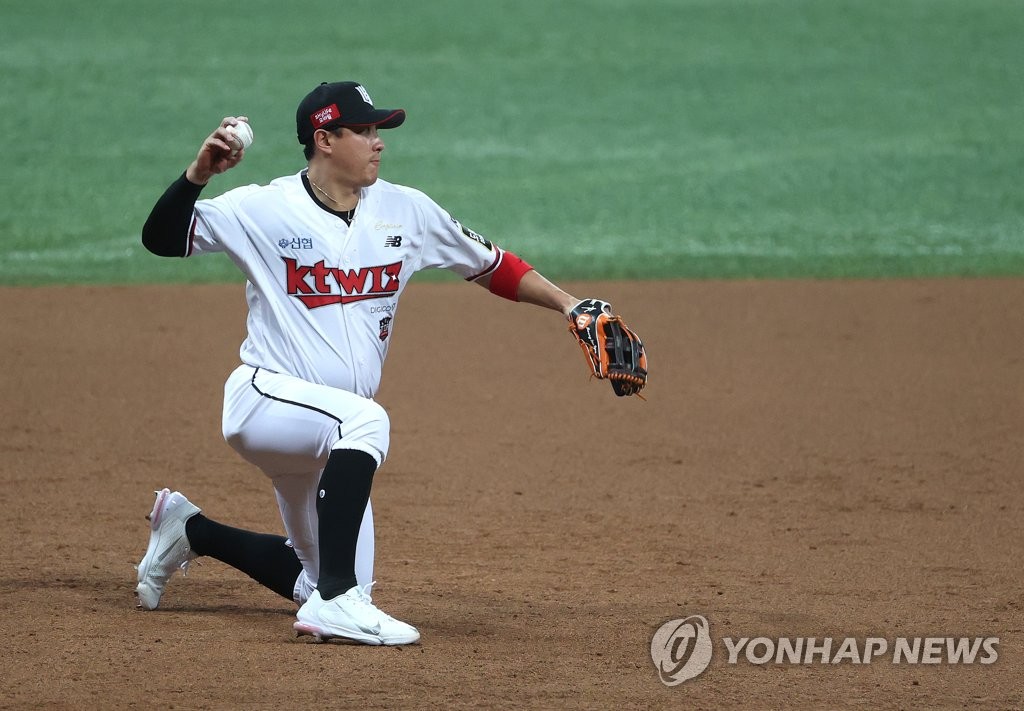 It was Hwang's first career postseason homer in his 24th game. The 34-year-old is playing in his 15th season and is also in his first Korean Series.

Hwang also flashed his leather at the hot corner, starting a double play in the third inning to erase a one-out walk and making a fine running grab in the sixth. He nearly hit a couple more home runs at the plate, sending two flyballs to the warning track in center. Hwang's sacrifice bunt in the fifth helped open the floodgates for the Wiz, who would score five runs that inning to open up a 6-0 advantage.

And it was Park who scored the first run of that pivotal inning. He was at second when Cho Yong-ho singled to right field. Third base coach Choi Man-ho came halfway down the line to put up the stop sign, but Park ran through it -- while narrowly avoiding a disastrous collision with Choi -- to slide home easily.

"You have to do whatever your coach tells you but honestly, I couldn't slow down," Park said. "I figured I could hurt myself if I tried to hit the brakes there. At least I got to score and I apologized to the coach after the inning."

Park isn't even the oldest player in the Wiz lineup, because they have Yoo Han-joon, the 40-year-old designated hitter in his 17th professional season. And Yoo was also very much involved in that big inning. 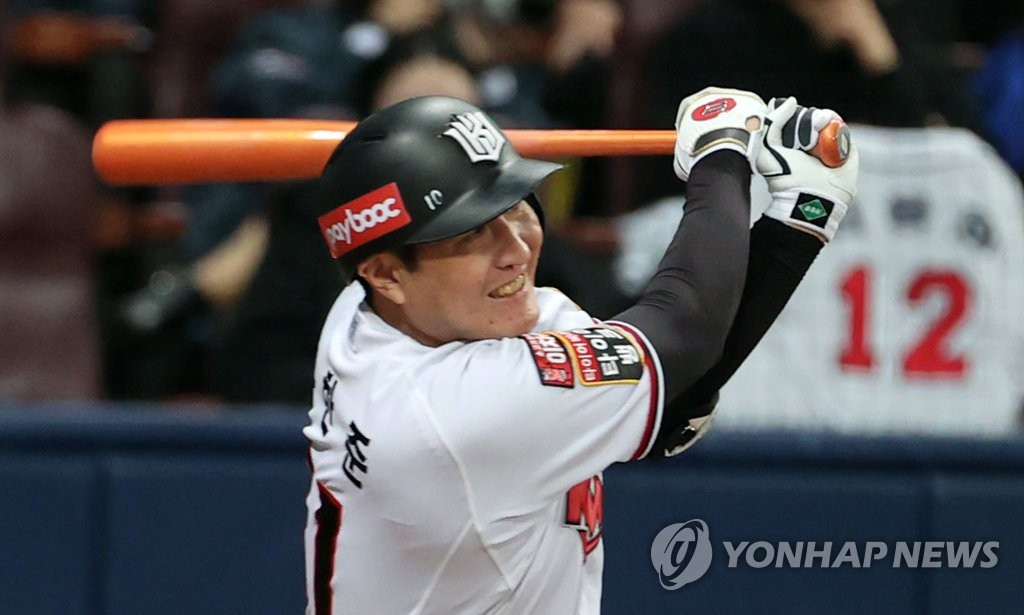 After Hwang's bunt, Choi Won-joon intentionally walked Kang Baek-ho to load the bases and set up a force play everywhere. With Yoo being one of the slowest runners in the game, the Bears' bet on trying to get an inning-ending double play seemed logical enough.

But Choi ended up hitting Yoo with his first pitch, right in Yoo's left elbow guard, to make it 3-0 for the Wiz. The veteran DH earned his first RBI of the series the hard way.

And as Park and some senior members had vowed before the game, they helped out So, the youngest player in this game at 20. So somehow pieced together six shutout innings despite walking five. He struck out four and gave up three hits.

After making that exceptional play, Park shouted out words of encouragement toward So, who admitted he was pitching through a tight neck.

"I could clearly hear him, and I was able to settle down after that," So said. "I didn't expect it to end up as a double play. And from then on, things started going our way. I had the confidence that, as long as I got groundballs, our infielders could turn double plays." 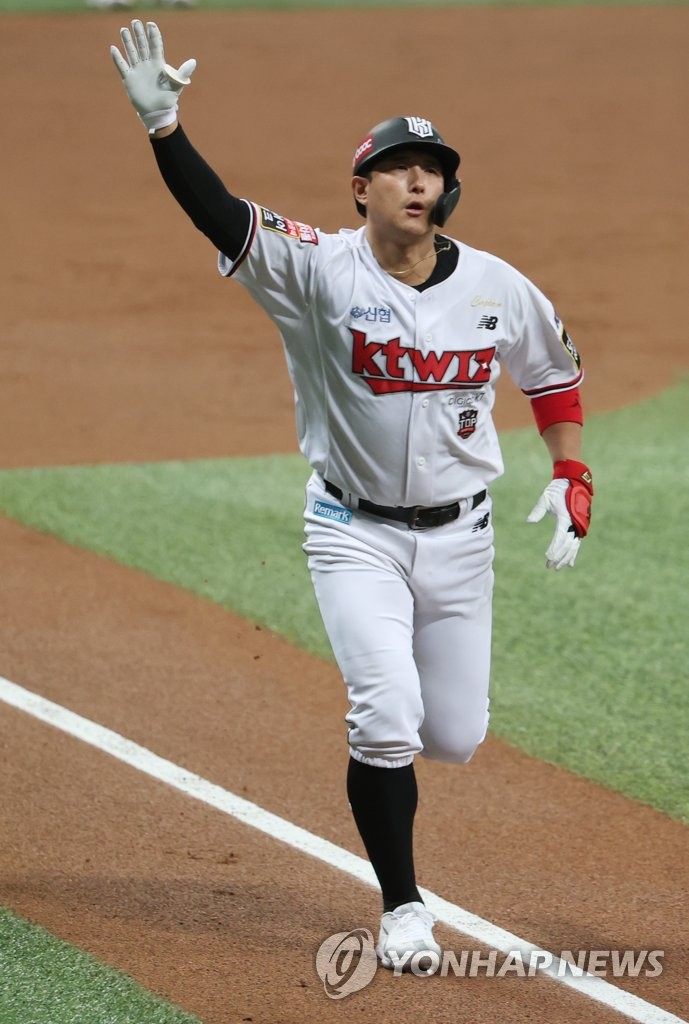