Choi also said such a framework will likely be a long and even torturous process.

"The peace process could likely be long, arduous and even torturous. On the way, North Korea might be tempted to look back and doubt or hesitate to stay the course," he said in the annual South Korea-U.S. Strategic Forum, jointly hosted by the Korea Foundation and the Center for Strategic and International Studies, a Washington based think tank.

"It is imperative to devise a structure from which no one can easily walk away," Choi added. "By presenting North Korea with a clear picture of what (it) can gain or lose through the process, we may be able to convince them that their best bet is to stick to the process." 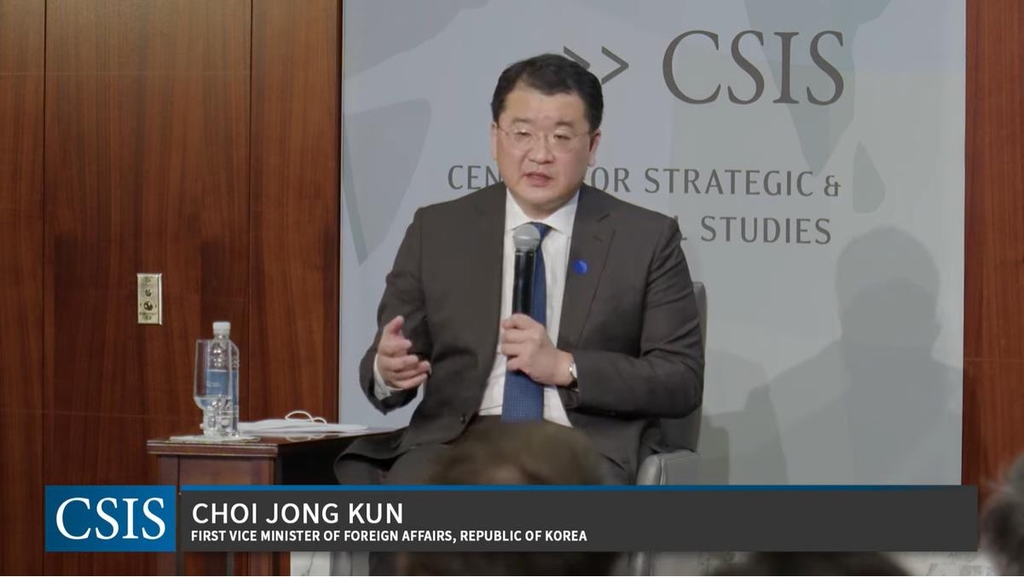 South Korean President Moon Jae-in renewed his proposal for an end of war declaration in his address to the U.N. General Assembly in September, calling it a "catalyst" that can help restart dialogue with North Korea.

Choi reiterated that declaring an end to the Korean War would help bring North Korea back to the dialogue table but also create an "irreversible" process for the denuclearization of the Korean Peninsula.

"The end of war declaration would mark a meaningful entry point for two Koreas and United States to shape this new order by opening up a venue for denuclearization dialogue and the peace talks," said Choi.

"By putting an end to the Korean War, our government intends to commence the process of making irreversible progress in denuclearization and turning the abnormally long armistice into peace regime," he added.

South and North Korea technically remain at war, as the 1950-53 Korean War ended with an armistice.

The U.S., despite its repeated overtures to Pyongyang for dialogue, has widely been considered critical of declaring an official end of war with a nuclear-armed North Korea.

Choi on Sunday said he expected a "good result" in the near future from discussions with the U.S. on the end of war declaration proposal.

"Above all, it is morally right thing to put an end to the war and begin the peace process," he told the annual forum held in Washington.

The South Korean diplomat also said his country does not have any fantasies when dealing with North Korea.

"My government, Moon Jae-in government, as you all know, has about six months in power. We do not aim to achieve everything at once. We do not push this in any hurry," he said. "I can say that we have never fantasized about the peace process."

"We want to create a structure and roadmap so that we can update, adapting to different circumstances and environments, and we believe that end of war declaration is one good example," he added.

Choi arrived here Sunday for talks with his U.S. counterpart, Wendy Sherman. He is also set to take part in trilateral discussions involving Sherman and their Japanese counterpart, Takeo Mori.