SEOUL, Nov. 16 (Yonhap) -- South Korea on Tuesday confirmed another case of highly pathogenic avian influenza from a local farm, the agriculture ministry said, sparking concerns over the fast spread of the virus.

A duck farm in Eumseong, a county about 130 kilometers south of Seoul, reported the suspected case Monday and in-depth analysis confirmed it as a highly pathogenic strain of H5N1, according to the Ministry of Agriculture, Food and Rural Affairs.

The authorities are culling around 12,000 ducks being raised there as a preventive step and have been implementing other quarantine measures while cordoning off the farm, it added.

The duck farm is located within a 3-kilometer radius from a quail farm, which reported a highly pathogenic flu case last week for the first time since late April.

Tuesday's outbreak is the fourth of the kind at local farms this season. Three of the four incidents were found in Eumseong, and the remaining one was from a duck farm in Naju, 355 kilometers south of Seoul.

The health authorities have since been strengthening regular inspections into local poultry farms and have enforced stronger antivirus measures.

Highly pathogenic avian influenza is very contagious among birds and can cause severe illness and even death, especially in domestic poultry. The disease naturally circulates among wild birds, but it can be spread to domestic poultry when they migrate to other regions in winter, according to the authorities. 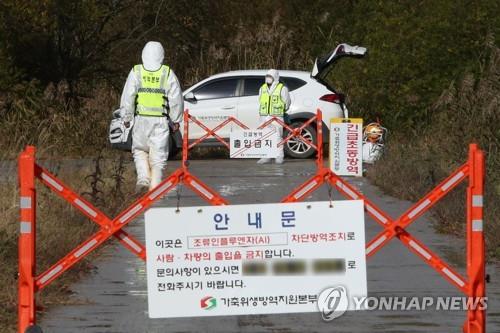