SEOUL, Nov. 16 (Yonhap) -- Foreign ministers from South Korea and 14 Pacific island countries held virtual talks on Tuesday during which they agreed to hold a summit of their leaders, Seoul's foreign ministry said.

As they agreed to expand cooperation on climate change and other issues of regional concern, the top diplomats also agreed to increase the frequency of their talks, from once every three years to every other year, the ministry said in a statement.

Since 2011, South Korea and the 14 Pacific island nations have held talks of foreign ministers.

Taking part in the talks were Papua New Guinea, Fiji, the Republic of the Marshall Islands, the Solomon Islands, Tuvalu, Vanuatu, Tonga, Palau, Niue, Nauru, Kiribati, the Federated States of Micronesia, Samoa and the Cook Islands. 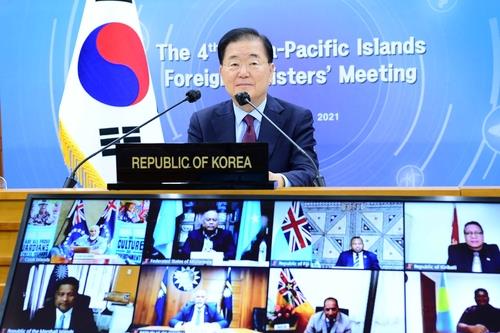