(ATTN: UPDATES with consultations on Iran, Myyamar issues in paras 9-11)
By Choi Soo-hyang and Byun Duk-kun

During the 60-minute talks in Washington, D.C. on Tuesday (local time), South Korea's First Vice Foreign Minister Choi Jong-kun and U.S. Deputy Secretary of State Wendy Sherman also discussed the alliance and other issues of common interest, including COVID-19 vaccines and the global supply chain crisis, according to the ministry.

"The vice ministers assessed seamless communications and coordination under way at all levels on ways to make progress in the Korea peace process, including the end-of-war declaration, and agreed to continue consultations on practical measures to bring North Korea to the dialogue table," the ministry said in a press release. It gave no other details on the consultation on the sensitive issue of Seoul's push for the declaration in a bid to help revitalize the Korea peace process.

The U.S. State Department released a separate statement on the results of the meeting, in which it made no direct mention of the proposed end-of-war declaration despite the reaffirmation of "shared commitment to the complete denuclearization of the Korean peninsula." 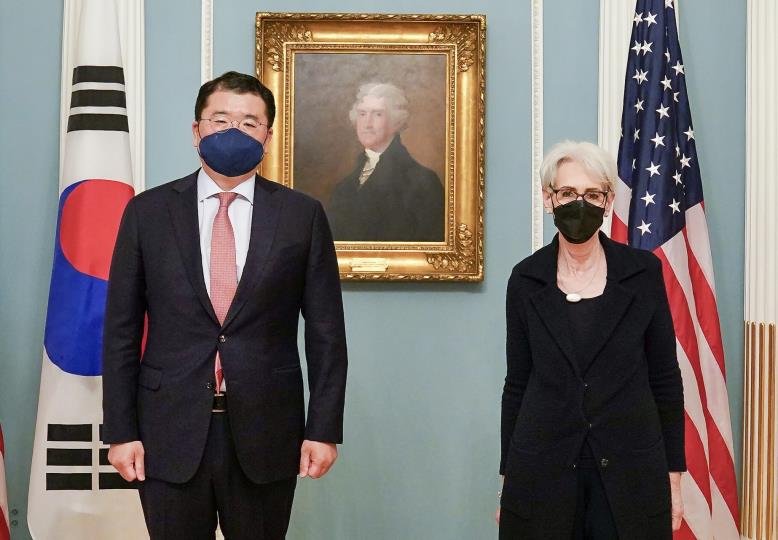 The liberal Moon Jae-in administration of South Korea says such a declaration, if issued, will help restart denuclearization negotiations with North Korea, which have stalled since 2019. It is running out of time, with the election to pick Moon's successor slated for March next year.

Concerns have persisted that the allies may have divergent views, or even a rift, on the matter.

U.S. National Security Adviser Jake Sullivan earlier said publicly that the two sides may differ "on the precise sequence or timing or conditions for different steps" for the declaration.

On Thursday, South Korea's top diplomat Chung Eui-yong said the allies' coordination over the declaration was in its final stages. Choi also said upon arriving in Washington on Sunday that he expects "good results" from discussions with the U.S. in the not too distant future.

Sherman welcomed South Korea's "regional and global leadership" and reaffirmed the U.S. will continue working with allies and partners "to defend the rules-based international order" as well as Washington's support for "all those working toward the peaceful restoration" of Myanmar's path to democracy, according to department spokesman Ned Price.

"Deputy Secretary Sherman and First Vice Foreign Minister Choi reaffirmed the U.S.-ROK Alliance as the linchpin of peace, security and prosperity in the Indo-Pacific and beyond," he said in a press release, referring to South Korea by its official name, the Republic of Korea.

The bilateral meeting between Choi and Sherman, the third of its kind this year, came one day before the U.S. and South Korean diplomats were set to be joined by their Japanese counterpart, Takeo Mori, for trilateral talks.

"The Deputy Secretary and the First Vice Foreign Minister underscored U.S.-Japan-ROK cooperation is essential to tackling the global challenges of the 21st Century, including combating COVID-19 and the climate crisis, and ensuring resilient supply chains and post-pandemic economic recovery," Price said in his statement.

The state department said the three will hold a joint press event following their meeting in Washington on Wednesday.