WASHINGTON, Nov. 17 (Yonhap) -- The United States is very satisfied with its consultations with South Korea and Japan on the best way to denuclearize the Korean Peninsula, U.S. Deputy Secretary of State Wendy Sherman said Wednesday.

The U.S. diplomat, however, declined to offer any direct response when asked if the U.S. supported declaring a formal end to the Korean War as proposed by South Korea.

"The United States is very satisfied with the consultations we are having both with the Republic of Korea and with Japan and with other allies and partners on the best way forward to ensure the complete denuclearization of the Korean Peninsula and I look forward to those continued consultations," she said in a press conference, referring to South Korea by its official name.

She made the remarks after a trilateral meeting with her South Korean and Japanese counterparts, Choi Jong-kun and Takeo Mori, in Washington. 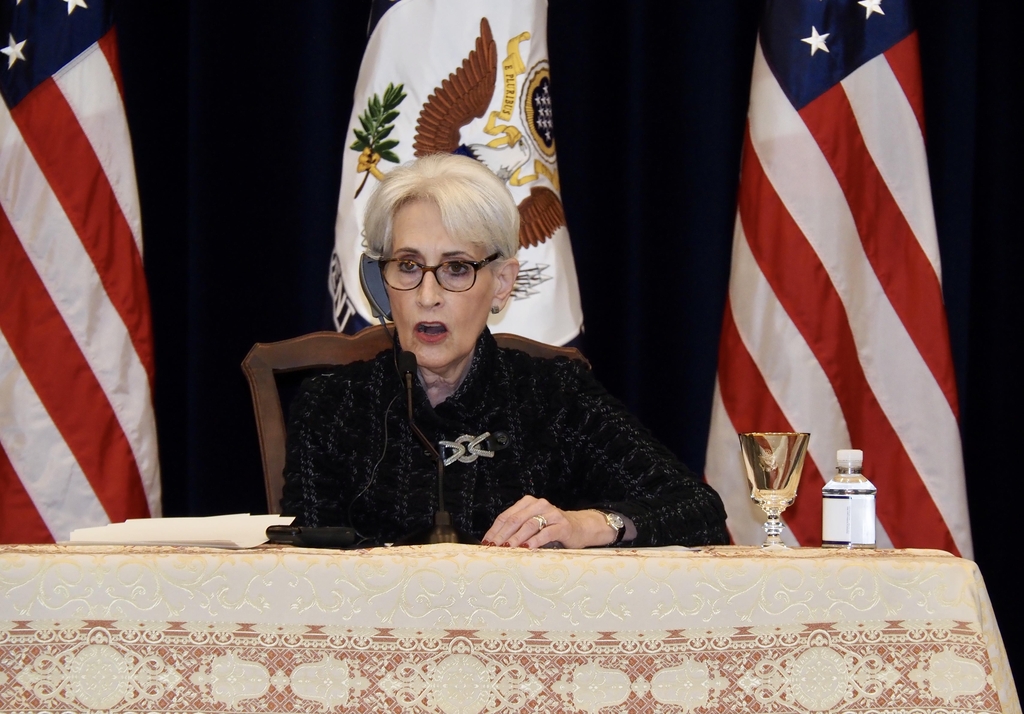 When asked if the U.S. support declaring an end to the Korean War in the near future, Sherman said the U.S. and its allies "are having good consultations" and that they will continue to do so.

Choi earlier said he expected a "good result" in not too distant future from discussions with the U.S. on the end of war declaration proposal.

Sherman underscored the importance of consultation among allies.

"I think that whenever we all consult and coordinate with each other, we always come out with a good result that ensures the interests of each of our countries and the overall interest of the world," said she.

U.S. National Security Advisor Jake Sullivan earlier hinted at a possible difference between Seoul and Washington over when an end of war declaration could or should be made.

"We may have somewhat different perspectives on the precise sequence or timing or conditions for different steps. but we are fundamentally aligned on the core strategic initiative here and on the belief that only through diplomacy are we going to really, truly be able to effectively make progress," the White House official said late last month.

Sherman said she and her counterparts from South Korea and Japan reaffirmed their "shared commitment to the complete denuclearization of the Korean Peninsula."

She also reaffirmed her country's commitment to engage diplomatically with North Korea.

"As we have said publicly the United States does not harbor hostile intent toward the DPRK. we believe that diplomacy and dialogue are essential to achieving the complete denuclearization of the Korean Peninsula and establishing a permanent peace," said the U.S. diplomat.

North Korea has stayed away from denuclearization negotiations since 2019. It has also ignored numerous overtures from the Joe Biden administration, which came into office in January.

Wednesday's press conference was originally scheduled to be a joint press event attended by Sherman and her Japanese and South Korean counterparts, but was attended by the U.S. diplomat alone.

Sherman said what she called a bilateral difference between South Korea and Japan that was "unrelated to today's meeting" had led to the change in the format of the press event.