SEOUL, Nov. 19 (Yonhap) -- LG Electronic Co.'s shipments of its premium OLED television have surpassed the 10 million milestone in the third quarter since it was released in 2013, new data showed Friday.

It took the South Korean TV maker seven years to reach the 5 million sales milestone, but it took only two years to achieve the same feat, showing the tech company's dramatic growth in the premium TV market.

For the first nine months of this year, a total of 2.63 million units of LG OLED TVs were shipped, double the tally from a year ago and already surpassing last year's total shipments. 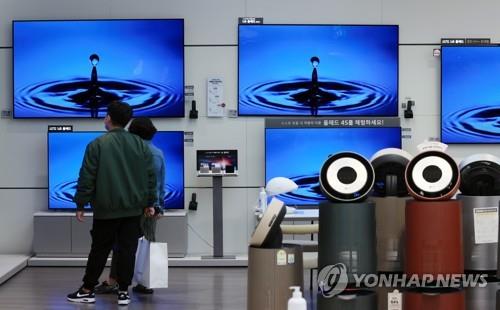 In the third quarter, global OLED TV shipments came in at 1.53 million units, and the figure is expected to pass 2 million units in the fourth quarter when demand for TV generally surges. By year-end, the number is projected to reach 6.5 million.

LG accounted for more than 60 percent of the global OLED TV market in the three months ending in September.

During the third-quarter earnings call last month, the company said it was on schedule for OLED TV shipments for this year and is "confident to achieve" its goal of selling 4 million units by year-end, double last year's target, despite concern over a "slowdown in TV demand globally, uncertainties in the global economy and expansion of the 'living with COVID-19' scheme."

If the goal is achieved, OLED TVs will take up 32 percent of the company's total TV sales and the sector will post 24 percent growth on a year-on-year basis, the company said.

Meanwhile, the global TV market peaked out in the third quarter, shipping 50.3 million units, down by more than 20 percent from 62.9 million units a year earlier.