A civilian foundation honoring the group of 33 fighters hosted the event at a national cemetery in Daejeon, 160 kilometers south of Seoul, amid a renewed spat between Seoul and Tokyo over the East Sea outcroppings.

Territorial tensions flared anew as a senior Japanese diplomat boycotted a joint press event involving his South Korean and U.S. counterparts in Washington on Wednesday in protest over the recent visit to Dokdo by a top South Korean police officer.

Of the 33 volunteers, 17 have been laid to rest at the Daejeon cemetery with 10 others buried in other sites. Five of them remain alive, while the whereabouts of the other remain unknown.

The government has provided financial and other forms of support for the foundation in line with a special law enacted in 2005 to remember the volunteer group.

Dokdo has long been a recurring source of tension between the two neighbors, as Tokyo continues to make the sovereignty claims in its policy papers, public statements and school textbooks. 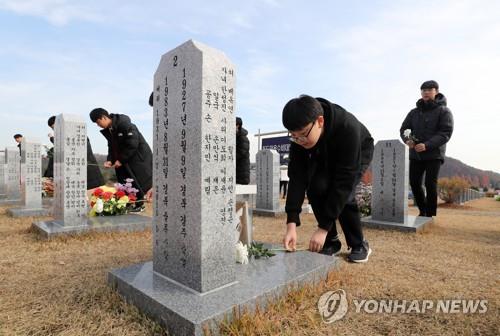