The two sides also discussed the need "to create sustainable, resilient, inclusive and competitive trade policies that achieve broad-based prosperity," according to the statement.

Seoul and Washington have sought to boost cooperation to ensure resilient supply chains of major components and other items, such as semiconductors, amid a global supply shortage and an intensified Sino-U.S. rivalry.

"We are using our KORUS foundation to discuss how we can tackle major issues and challenges that we're facing today, such as supply chain resilience, worker rights and environmental protection," Tai said in her opening remarks. KORUS refers to the bilateral free trade pact. 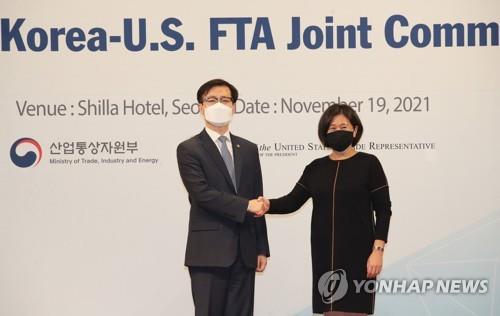 The two sides also discussed steel tariffs, according to Seoul's Ministry of Trade, Industry and Energy.

"We once again delivered our stance and concerns regarding the Section 232 rules, and demanded that the two sides begin negotiations for its revision at an early date," the ministry said in a statement.

The two sides did not directly mention the steel issue on their joint statement, but said that they "agreed to continue their close cooperation to resolve issues that may arise."

The U.S. decided in October to lift import tariffs of 25 percent on European steel and 10 percent on aluminum imposed by former President Donald Trump in 2018. The lifting is set to take effect on Jan. 1.

In 2018, the U.S. waived the tariffs on South Korean products, but it was in return for a yearly import quota of 2.63 million tons of steel, or 70 percent of Seoul's average steel products export volume over the past three years.

During the talks, the two sides agreed to hold meetings on labor affairs in the near future, stressing that the importance of labor and environmental issues to the welfare of the people.

Also on the table for the meeting between Yeo and Tai were new technologies in agricultural sectors, a certificate of origin and visa.

In addition, they assessed the achievements of their free trade agreement which came into force in March 2012.

"I look forward to exploring ways in which we could develop the agreement further into the future together," Yeo said. "In particular, at a time of growing uncertainties in the global economy due to the ongoing pandemic, the KORUS FTA is serving as a bedrock for our robust bilateral trade and investment cooperation."

Trade volume between the two nations grew around 26 percent to US$131.6 billion since the conclusion of the free trade deal, according to government data.

"Korea is one of our most valued trading partners and one of our closest allies. The KORUS actually continues to be both a reflection of that close relationship and the foundation upon which we can build to make it even closer and more cooperative," Tai said.

It is the first time in 11 years that a U.S. top trade official has visited South Korea. She arrived in Seoul on Thursday for a four-day visit that includes a meeting with the labor minister. 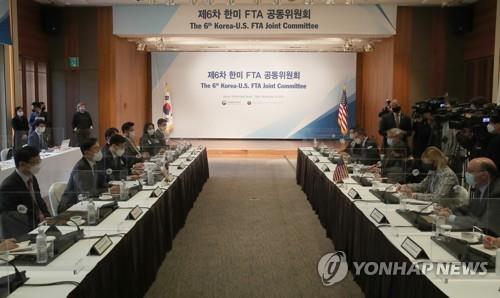