SEOUL, Nov. 22 (Yonhap) -- Yoon Seok-youl, the presidential nominee of the main opposition People Power Party (PPP), and his opponent Lee Jae-myung of the ruling Democratic Party (DP) are neck and neck in a hypothetical multicandidate race, a survey showed Monday.

Yoon garnered 40 percent support, while Lee trailed by only 0.5 percentage point at 39.5 percent, within the survey's margin of error, according to the survey of 1,007 adults conducted Friday and Saturday by the Korea Society Opinion Institute (KSOI). 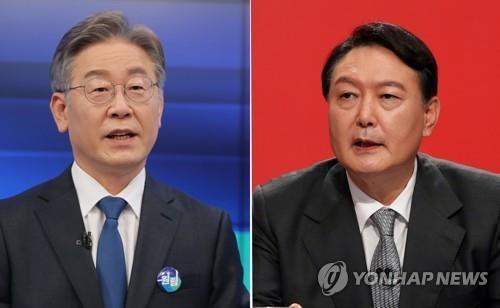 Meanwhile, President Moon Jae-in's approval rating rose to 39.5 percent, up 2.2 percentage points from a week ago, another survey showed.

In contrast, the approval rating of the DP rose 1.8 percentage points to 30.3 percent, the survey showed.