This marks the first time for any Asian act to win the top award at the AMAs.

The South Korean band also won in the favorite pop duo or group and favorite pop song categories with its megahit "Butter."

The group has been nominated for the fifth consecutive year in the AMAs since 2018 and has won for four years in a row. But it has never been nominated in the artist of the year category before. 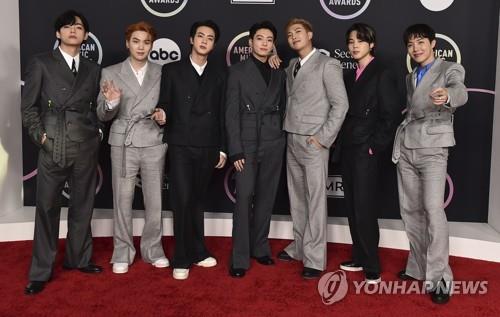 Fans had the final say on who wins the 2021 AMAs among the nominees chosen based on streaming, album and digital sales, radio and social activity.

The South Korean hit machine has continued its record-shattering run this year as its single "Butter" stayed for 10 non-consecutive weeks on the Billboard Hot 100. The band followed it up with two other chart-toppers, "Permission to Dance" and "My Universe," a collaborative single with British rock band Coldplay.

BTS was among the big-name performers from across the musical spectrum during the night. It played two songs, "Butter" and "My Universe," with the latter performed together with Coldplay for the first time. The K-pop group was due to perform the remix version of "Butter" with American rapper Megan Thee Stallion, but the rapper dropped the plan for personal matters.

Monday's feat is expected to raise BTS' chances of earning a Grammy nomination this year.

Last year, BTS made history when it earned its first Grammy nomination, becoming the first K-pop act to be nominated for the best pop duo or group performance award, considered the most prestigious honor in the music industry, with its single "Dynamite." It ended up failing to win, however.

Nominees for the 64th Grammy Awards will be announced Tuesday, with the awards ceremony set for Jan. 31 in Los Angeles.

BTS is scheduled to hold its first in-person concerts in two years in Los Angeles on Saturday and Sunday and on Dec. 1-2. On Dec. 3, it will perform on the L.A. stop of this year's iHeartRadio Jingle Ball Tour, the largest year-end radio show in the United States.