This marks the first time for any Asian act to win the top award at the AMAs.

"We're truly honored to be on this stage with such amazing, tremendous artists right over there," team leader RM said in English after accepting the artist of the year award.

"Seven boys from Korea united by the love for music met the love and support from all the Armies all over the world. Seriously, we would never take this for granted. Thank you so much. Love to give this hour to you guys," he added, referring to the name of the group's global fan base ARMY.

Suga said he never expected to receive the award and thanked ARMY for making it happen.

Jungkook said in English, "We believe that this award opens the beginning of a new chapter. I so appreciate your help. Thank you ARMY." 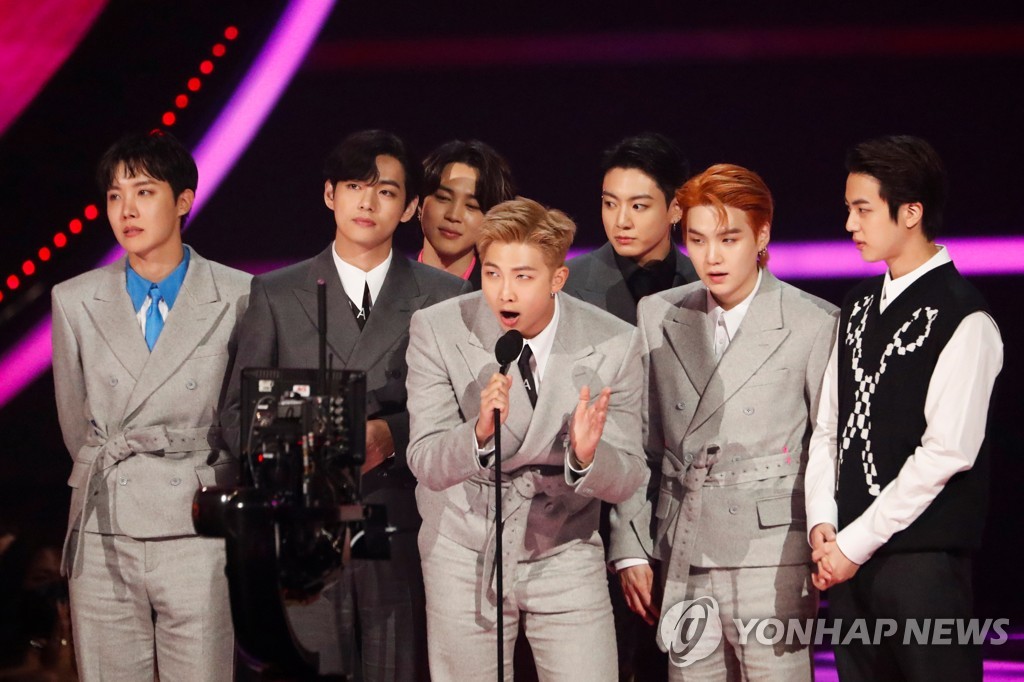 The K-pop giant also won in the favorite pop duo or group and favorite pop song categories with its megahit "Butter."

The group has been nominated for the fifth consecutive year in the AMAs since 2018 and has won for four years in a row. But it has never been nominated in the artist of the year category before.

Fans had the final say on who wins the 2021 AMAs among the nominees chosen based on streaming, album and digital sales, radio and social activity.

The South Korean hit machine has continued its record-shattering run this year as its single "Butter" stayed for 10 non-consecutive weeks on the Billboard Hot 100. The band followed it up with two other chart-toppers, "Permission to Dance" and "My Universe," a collaborative single with British rock band Coldplay. 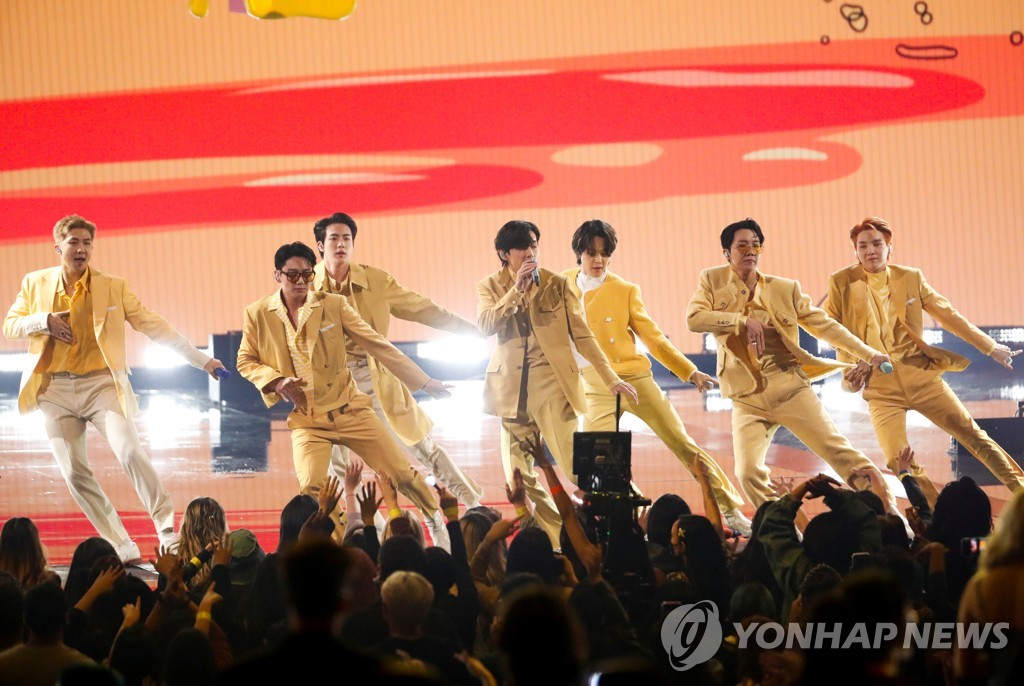 "The win showed that BTS has become a superstar representing the times, like The Beatles of the 1960s, Elton John in the 1970s, Michael Jackson in the 1980s, and Nirvana and Mariah Carey in the 1990s," music industry critic Lim Jin-mo said in a telephone interview with Yonhap News Agency on Monday.

"BTS did not shoot to fame with just one hit but was beloved on Billboard charts for over two to three years, and (this feat) proved the mighty power of its fandom," he said.

Another music critic, Kim Do-heon, rated highly the fact that BTS took home the most prestigious honor at the AMAs, beating out some of the biggest names of the music industry.

"We need to see what position BTS has been in in the pop market this year," he said. "The popularity of BTS is now a natural phenomenon enough to be called 'universal' to those who saw the popularity of 'Dynamite' as an exceptional event."

BTS was among the big-name performers from across the musical spectrum during the night. It played two songs, "Butter" and "My Universe," with the latter performed together with Coldplay for the first time. The K-pop group was due to perform the remix version of "Butter" with American rapper Megan Thee Stallion, but the rapper dropped the plan for personal matters. 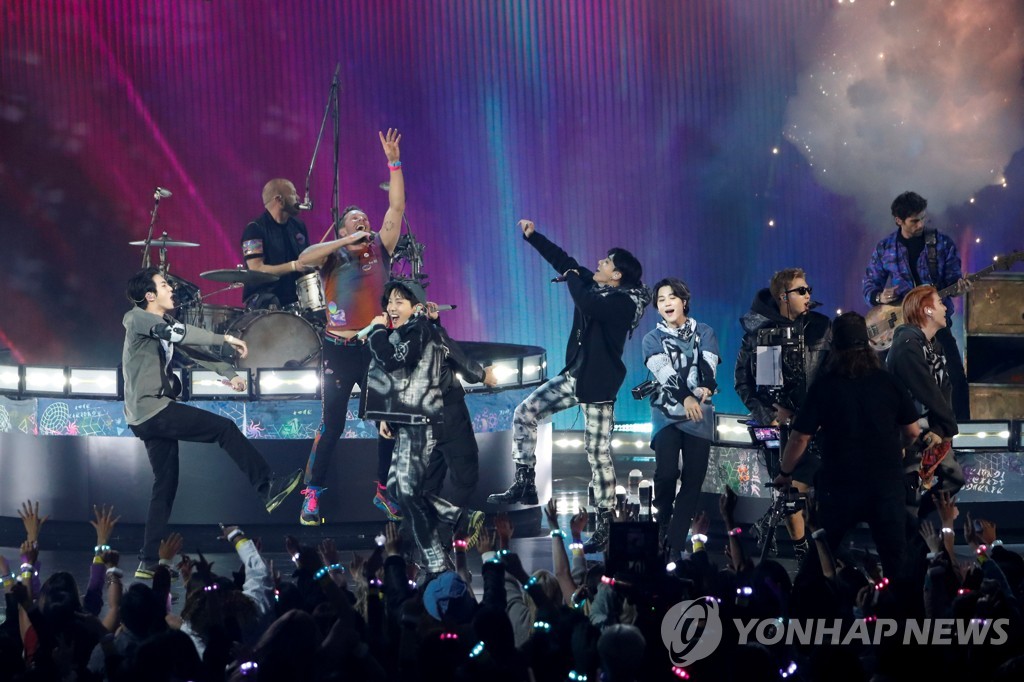 Monday's feat is expected to raise BTS' chances of earning a Grammy nomination this year.

Last year, BTS made history when it earned its first Grammy nomination, becoming the first K-pop act to be nominated for the best pop duo or group performance award, considered the most prestigious honor in the music industry, with its single "Dynamite." It ended up failing to win, however.

Nominees for the 64th Grammy Awards will be announced Tuesday, with the awards ceremony set for Jan. 31 in Los Angeles.

BTS is scheduled to hold its first in-person concerts in two years in the U.S. city on Saturday and Sunday and on Dec. 1-2. On Dec. 3, it will perform on the L.A. stop of this year's iHeartRadio Jingle Ball Tour, the largest year-end radio show in the United States. 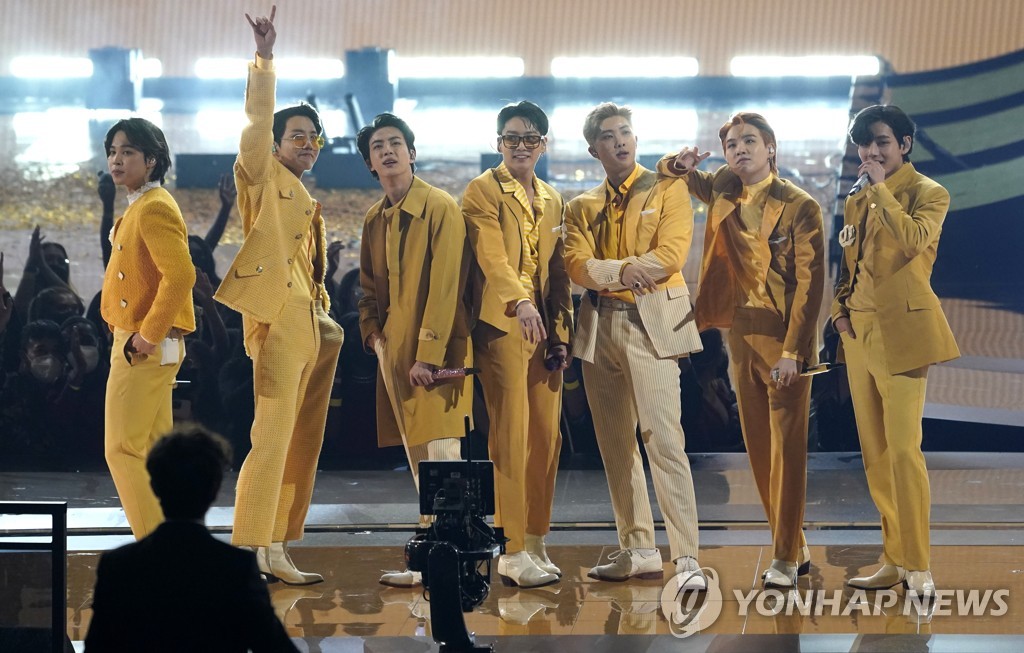