Alvarado was handed a certificate of honorary citizenship of Seoul by Mayor Oh Se-hoon in a ceremony held at Seoul City Hall earlier in the day, according to city officials.

He is currently on a four-day trip to South Korea that includes a summit with President Moon Jae-in on Tuesday.

The awarding makes Alvarado the third Costa Rican president to become an honorary citizen of Seoul.

Alvarado drew attention after saying in a speech last year that Costa Rica aspires to become the Korea of South America.

During the awarding ceremony, Alvarado said he made the remark because Costa Rica shares key principles with South Korea, such as democracy, technology and economic development as well as sustainability.

He also said that Costa Rica will always embrace South Korea in its heart.

Mayor Oh also expressed hope that the two countries will proactively advance their cooperative partnership in every sector. 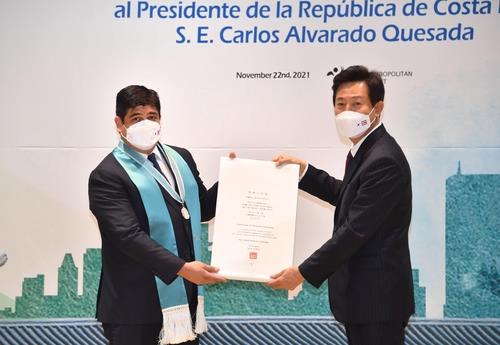