WASHINGTON, Nov. 22 (Yonhap) -- The press secretary for the U.S. Department of State reiterated the importance of trilateral cooperation between the U.S., South Korea and Japan on Monday, saying the countries will be more successful when working together.

"When it comes to the relationship between our allies, Japan and the Republic of Korea, you are right that Deputy Secretary Sherman had an opportunity to meet trilateral with her counterparts here in Washington last week," the department press secretary said in a daily press briefing, referring to South Korea by its official name. 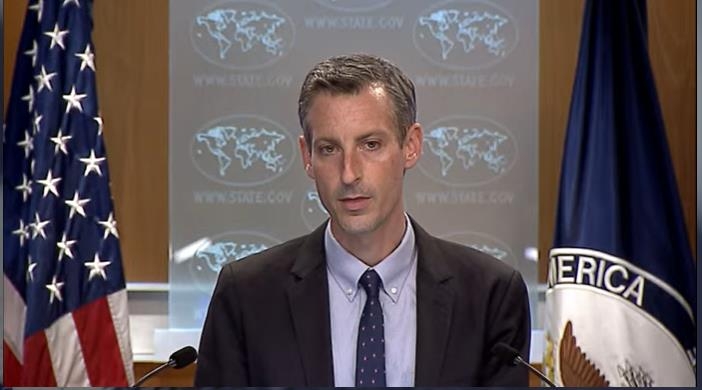 The press conference following the vice ministerial talks here last week was originally set to be held jointly by Sherman and her South Korean and Japanese counterparts, but was held unilaterally by the U.S. diplomat alone as Mori refused to take part.

Mori was later said to have taken issue with a recent trip by the head of South Korea's national police to Dokdo, a set of South Korean islets in the East Sea, to which Tokyo often lays territorial claims.

Choi has said he had flatly dismissed Japan's protest, along with its renewed claim to Dokdo, and that he had agreed to his U.S. counterpart holding a press conference by herself on the outcome of their trilateral meeting because of its importance.

"I can tell you and I think you heard this directly from the Deputy Secretary that the trilateral session itself was very constructive. It was a good meeting," Price said.

"It was an opportunity for the three countries to compare notes, to discuss many areas, shared areas of concern, to discuss our common objective."