SEOUL, Nov. 23 (Yonhap) -- Large South Korean companies have cut their combined workforce by more than 1 percent over the past two years amid the coronavirus pandemic, a corporate tracker said Tuesday.

The number of workers hired by 313 out of the country's top 500 firms by sales came to 1.24 million as of end-September this year, down 1.02 percent, or around 12,800, from two years earlier, according to the Leaders Index.

These companies removed some 18,200 regular jobs over the cited period, while increasing the number of non-regular workers by about 5,400.

Women took the brunt of the job reductions as they accounted for 67 percent of those laid off. Male workers took up 74 percent of their combined workforce as of the end of September.

IT and electric and electronic companies hired around 8,900 more workers during the two-year period, while retailers, wholesalers and distribution firms cut nearly 11,300 jobs.

Retail giant Lotte Shopping Co. registered the biggest job decrease of about 5,100, trailed by top multiplex chain CJ CGV Co. with around 3,700 and supermarket operator GS Retail Co. with some 1,800, according to the Leaders Index. 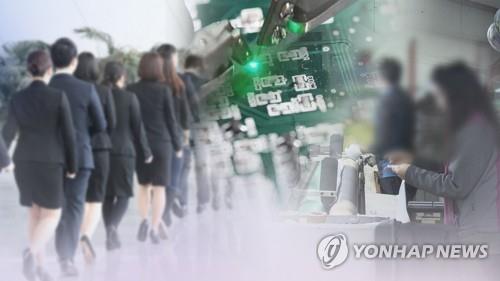