SEOUL, Nov. 23 (Yonhap) -- Inter-Korean relations went through turbulent developments under the military junta of former South Korean President Chun Doo-hwan, who died Tuesday, highlighted by the first-ever reunion of families on the peninsula separated by the 1950-53 Korean War and two deadly terrorist attacks by the North.

The Army general-turned-strongman rose to power in a 1979 coup and ruled the country until 1988. He died at his home in Seoul at the age of 90.

In 1983, relations between the two Koreas hit one of their lowest ebbs after 17 high-ranking South Korean officials were killed in a bomb attack in Burma, now called Myanmar, blamed on the North, during Chun's visit to the Southeast Asian country.

Chun survived the assassination attempt, but many of his Cabinet ministers were killed.

About a year later, Pyongyang offered to provide humanitarian assistance to the flood-hit South Korea in an apparent peace overture.

The relief materials -- including 8,000 tons of rice, 100,000 tons of cement, clothes and medicines -- were delivered to Seoul in September 1984, marking the first such exchange of aid between the two sides since the Korean War.

The reconciliatory mood led to a series of inter-Korean talks and the first-ever reunion of families separated by the three-year conflict the next year. But the thaw did not last long.

In 1987, North Korean agents launched a bombing attack on a Korean Air Lines passenger plane near Myanmar, killing all 115 people on board. The plane was heading for Seoul from Baghdad when the explosion took place.

Kim Hyon-hui, one of the North Korean agents involved in the bombing, later said the attack was aimed at disrupting the 1988 Seoul Summer Olympics.

It was not until the administration of Roh Tae-woo, Chun's friend who succeeded him, that the two Koreas saw major progress in their relations.

Under Roh's presidency, South and North Korea held their first-ever prime ministerial talks in 1990 and concurrently joined the United Nations the following year. 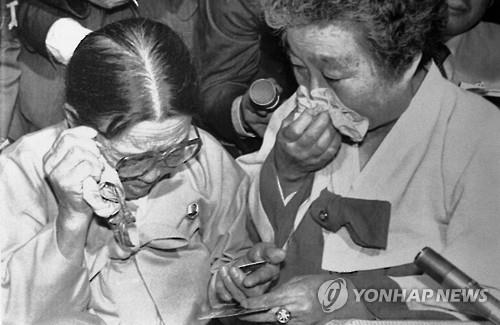