Yoon garnered 44.1 percent support against Lee's 37 percent in the survey of 1,011 adults conducted Monday and Tuesday, according to Realmeter.

The difference was down to 7.1 percentage points from 9.8 points two weeks ago after Yoon lost 0.3 point and Lee gained 2.4 points.

Yoon still led beyond the margin of error of plus or minus 3.1 percentage points at a 95 percent confidence level.

In third place was Ahn Cheol-soo, the presidential candidate of the minor opposition People's Party, at 4 percent, followed by Sim Sang-jeung of the minor progressive Justice Party at 3.8 percent and former Finance Minister Kim Dong-yeon at 1.1 percent.

Realmeter said support for Yoon was almost unchanged, as the publicity effects of his nomination faded and no new momentum arose.

Lee, on the other hand, appeared to have gained points by showing flexibility through his retreat from calls for universal COVID-19 relief funds, among other factors, the pollster said.

Yoon led Lee 48.9 percent to 39.3 percent in a hypothetical two-way matchup, narrowing the gap to 9.6 percentage points from 13 points previously.

When asked how they would frame the March 9 presidential election, 54.3 percent of respondents said they hope to see a regime change by the opposition, while 38.4 percent said they wish to see an extension of the Democratic Party's rule. 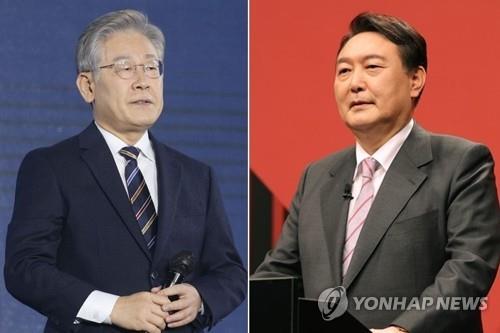 Yoon leads Lee by smaller margin than before in presidential race: survey

Yoon leads Lee by smaller margin than before in presidential race: survey