SEOUL, Nov. 24 (Yonhap) -- South Korea has recovered dozens of bone fragments presumed to be of troops killed in the 1950-53 Korean War during excavation work on a former battle site, the defense ministry said Wednesday.

The military completed its excavation project in White Horse Ridge located inside the Demilitarized Zone (DMZ) separating the two Koreas.

The project, which kicked off in September last year, has discovered 37 bone pieces -- believed to have belonged to 22 troops -- and 8,262 articles, including combat gear.

The retrieval project is part of a 2018 inter-Korean military accord. But the South has conducted the project alone, as the North has remained unresponsive to calls to join the work.

White Horse Ridge is one of the areas where the most casualties were reported during the war. In late October, the military found remains of a South Korean soldier wearing a helmet and maintaining a defense posture.

Defense Minister Suh Wook visited the site on Wednesday and said that the military must maintain its full defense posture to continue carrying out the excavation projects at the DMZ.

"We hope that the two Koreas carry out joint excavation projects in the DMZ in the nearest future possible," Suh said during his visit.

The recovery work in White Horse Ridge followed the conclusion of the yearslong excavation work at the nearby Arrowhead Ridge in June.

At Arrowhead Ridge, the military recovered a total of 3,092 bone fragments believed to have belonged to 424 troops killed in action. 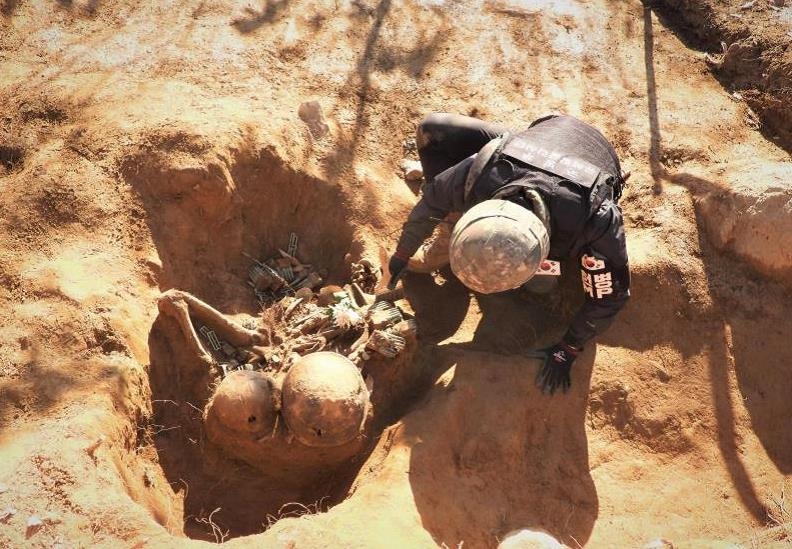