SEOUL, Nov. 25 (Yonhap) -- The number of jobs for wage workers in South Korea expanded nearly 4 percent in the second quarter amid signs of the economy's recovery from the fallout from the coronavirus pandemic, data showed Thursday.

The number of paid employee jobs had reached 19.6 million as of the end of June, up 3.6 percent, or 681,000, from a year earlier, according to the data from Statistics Korea.

By age, the number of jobs for those in their 60s swelled 15.4 percent on-year, or 392,000, marking the highest increase among all age groups.

But jobs for salaried workers in their 30s fell 0.4 percent, or 17,000, from a year earlier, extending on-year declines to a seventh straight quarter.

By industry, the manufacturing sector added 25,000 wage workers in the second quarter from a year earlier, the first on-year gain in seven quarters.

Jobs in the health and social welfare segment jumped by 192,000, with those in the public administration sector rising by 70,000.

The accommodations and food service industries suffered the fifth straight quarter of falls in jobs in the second quarter. Such sectors shed 9,000 jobs for wage workers, but it was smaller than a fall of 72,000 posts three months earlier.

The data had also showed men accounting for 57.4 percent of the total wage-worker jobs in Asia's fourth-largest economy as of the end of June. 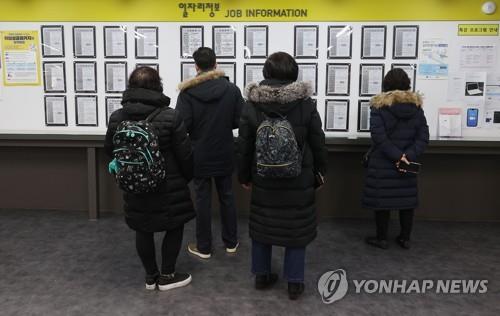