SEOUL, Nov. 25 (Yonhap) -- The head of a militant umbrella labor union was sentenced to one year in prison, suspended for two years, on Thursday for organizing mass rallies earlier this year in violation of COVID-19 regulations.

The Seoul Central District Court also ordered Yang Kyung-soo, the chief of the Korean Confederation of Trade Unions (KCTU), to pay 3 million won (US$2,500) in fines.

The KCTU leader was arrested and indicted in September on charges of violating the Assembly and Demonstration Act and the Infectious Disease Control and Prevention Act, as well as causing traffic disruptions.

Yang organized multiple rallies in downtown Seoul between May and July when the greater Seoul area was under strict social distancing rules banning all social rallies, except for essential corporate or official purposes.

Yang has admitted to his charges but pleaded for leniency during court hearings, claiming that the no-assembly order restricted freedom of assembly.

The court convicted Yang of all charges, saying the defendant had a responsibility to comply with the state-led COVID-19 guidelines in a situation where many people's daily lives were under restriction due to the pandemic.

The court said, however, that it decided on the suspended term after taking into consideration that no COVID-19 transmissions were reported among participants of the rallies, as well as his admission to the charges.

Yang spent 84 days in prison before he was set free upon the court ruling. 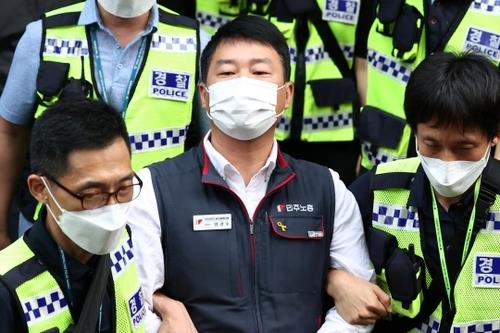