Trading volume was moderate at about 587 million shares worth some 9.3 trillion won (US$7.8 billion), with losers outnumbering gainers 642 to 228. 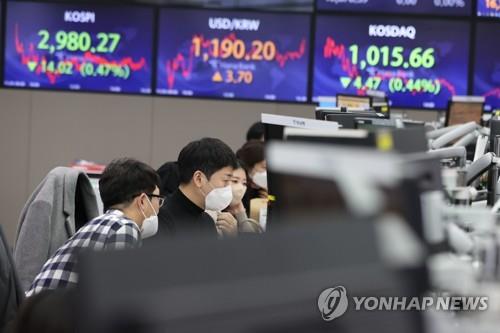 The KOSPI got off to a weak start after minutes of the Federal Open Market Committee (FOMC)'s latest meeting showed a much more hawkish stance.

Also, the Bank of Korea (BOK) raised the benchmark seven-day repo rate by 0.25 percentage point to 1 percent and revised up its consumer inflation outlook for this year.

"Macro events such as the FOMC minutes hinting hawkish content and the BOK's decision to raise the rate act as downward pressure to the market," Kiwoom Securities analyst Kim Sae-hun said.

The local currency closed at 1,190.2 won against the U.S. dollar, down 3.7 percent from the previous session's close.

Bond prices, which move inversely to yields, closed higher. The yield on three-year Treasurys lost 8 basis points to 1,933 percent, and the return on the benchmark five-year government bond fell 6.9 basis points to 2.168 percent.