SEOUL, Nov. 25 (Yonhap) -- Ruling Democratic Party presidential nominee Lee Jae-myung said Thursday he believes a policy of appeasement has been more effective in dealing with North Korea than a policy of confrontation and sanctions.

The remark suggests Lee will largely inherit the policies of the Moon Jae-in administration when it comes to the ongoing effort to get North Korea to dismantle its nuclear weapons program.

"Judging based only on the current situation, I believe the current policy of appeasement is proving to be more effective than a hard-line confrontational policy or sanctions policy," he said during a discussion with the Seoul Foreign Correspondents' Club. 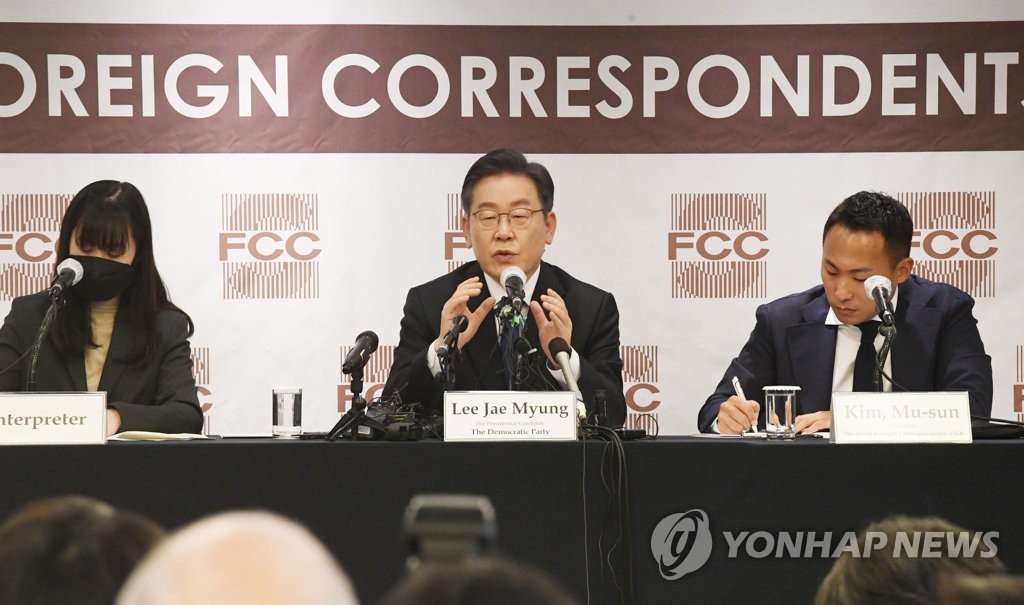 "I think it's difficult to say with 100 percent certainty that the hard-line policy of sanctions and pressure led to as much results as hoped for by Western countries," he added.

Lee made clear that the overriding goal in Seoul's North Korea policy is to prevent another war on the peninsula and that the choice of an appeasement policy or hard-line policy will depend on the political situation at a given time.

Neither policy is always correct and both can be used in turn or simultaneously and given different weight, he said.

Lee also noted the need for both sides to keep their promises and pointed to the North's 2020 destruction of an inter-Korean liaison office as something that "should not have been done" and "a big shame."

"We have to stick to our agreements and clearly point out faults while constantly talking and communicating to find a mutually beneficial path," he said. "It will require a lot of effort but it is fully worth that time and effort."

Lee also shared his view on Japanese companies' refusal to obey the South Korean Supreme Court's 2018 ruling ordering them to compensate Koreans who were forced to work for them under Tokyo's 1910-45 colonial rule of the Korean Peninsula.

"It's practically impossible to decide not to follow a ruling involving the offending companies and the civilian victims," he said. "We must find a solution that is premised on acknowledging that."

Lee claimed that the Korean victims' main aim is not to receive money but a sincere apology and that he believes any outstanding matters of compensation can easily be resolved after that.

On his own policy toward Japan, Lee said he would pursue a "two-track" approach of separating historical and territorial issues from social and economic cooperation.

He said perceptions that he is a Japan hawk are a "misunderstanding" because he personally loves the Japanese people and thinks highly of their frugality, diligence and politeness.