Trading volume was moderate at about 582 million shares worth some 11.6 trillion won (US$9.7 billion), with losers outnumbering gainers 799 to 105. 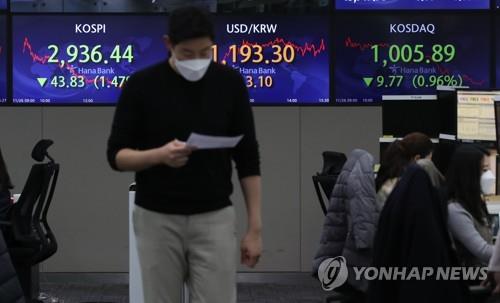 Losses of chemical and tech heavyweights led the KOSPI's retreat.

South Korea added 3,901 new COVID-19 cases Friday, two days after a record 4,115. Also, market sentiment cooled on news the new variant strain of the coronavirus is spreading in South Africa and is set to spread further into other countries.

"The resurgence of COVID-19 has been affecting the overall financial markets -- investors seem to have dumped stocks in most sectors, except the vaccine-related shares," said Mirae Asset Securities analyst Park Gwang-nam.

Bank shares rose in the wake of the central bank's rate hike the previous day.

The local currency closed at 1,193.3 won against the U.S. dollar, down 3.1 won from the previous session's close.