Austin is set to depart for South Korea on Tuesday (Washington time) to attend the 53rd Security Consultative Meeting (SCM) slated for Thursday. It marks the first SCM between Seoul's Defense Minister Suh Wook and Austin since the inauguration of the Joe Biden administration in January.

The SCM comes as Seoul and Washington have been stepping up coordination to resume nuclear diplomacy with North Korea, despite indications of Pyongyang doubling down on its nuclear and missile programs.

High on the agenda is the conditions-based wartime OPCON transition, after which a four-star South Korean general is to lead the allies' combined forces during wartime. Currently, the U.S. has the wartime OPCON, while the South has the peacetime OPCON.

The two sides are expected to discuss when and how they will conduct the full operational capability (FOC) test of the three-stage program designed to verify South Korea's capabilities required for the OPCON handover.

In 2019, the allies completed the initial operational capability (IOC) test. But they have yet to complete the FOC test, the second part of the verification program. The full mission capability (FMC) test is the last part of the program.

The allies' discussions related to the FOC test have been proceeding in a "very amicable" atmosphere, a Seoul official said last week -- remarks that raised hopes for progress in related consultations between the two sides.

Suh and Austin also plan to discuss ways to beef up cybersecurity cooperation, including the resumption of the "Cyber Cooperation Working Group" -- an apparatus that the allies agreed to form years ago but have yet to fully activate due to administrative and other issues.

Space cooperation is another key topic, as Washington has sought to rally its allies and partners to promote the secure, sustainable use of outer space amid signs of an arms race in the new security domain.

In addition, the minister and the secretary plan to discuss ways to back up ongoing diplomacy to encourage Pyongyang's return to dialogue and bring the stalled efforts for lasting peace on the Korean Peninsula back on track.

At the SCM, the two sides are also expected to touch on the ongoing process of returning U.S. military bases at the Yongsan Garrison in central Seoul to ensure Seoul's mega project to build a national park there can proceed as planned.

In a press release last week, the Pentagon said that at the SCM, "both sides are expected to pledge to continue to develop the alliance -- the linchpin of peace and stability on the Korean Peninsula and in Northeast Asia -- in a mutually reinforcing and future-oriented manner."

Aside from Suh and Austin, the SCM will also be attended by the allies' top defense officials, including Seoul's Joint Chiefs of Staff Chairman Gen. Won In-choul and his U.S. counterpart, Gen. Mark Milley, as well as Adm. John C. Aquilino, head of the U.S. Indo-Pacific Command, and Paul LaCamera, the chief of the U.S. Forces Korea.

On the eve of the SCM, Gen. Won and Gen. Milley, will also meet for the 46th Military Committee Meeting to discuss North Korea-related security situations and the defense posture of the allied forces.

Also on Wednesday, Suh and Austin are to attend an annual alliance dinner session hosted by the Korea-U.S. Alliance Foundation and the Korea Defense Veterans Association. 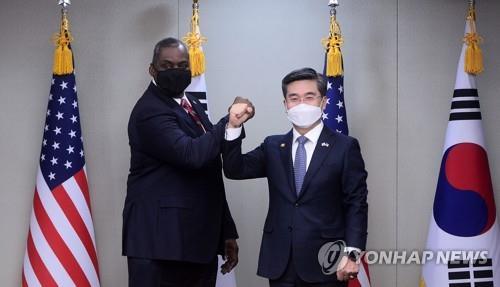