(ATTN: UPDATES with more details in paras 6-9)
By Park Boram

SEOUL, Nov. 29 (Yonhap) -- A 35-year-old stalking murder suspect timidly apologized Monday as he appeared before the public eye for the first time since he was arrested and had his identity disclosed on suspicions of stalking and brutally killing his ex-girlfriend.

Kim Byung-chan stood in front of reporters and photographers as he was taken from Seoul Namdaemun Police Station to the Seoul Central District Prosecutors' Office for a further investigation and indictment on the stalking murder charges.

Kim repeatedly said, "I am sorry," with a timid voice and his head downward without removing a face mask.

When asked for comment on the victim and her bereaved family, Kim again said, "I am very, very sorry" but did not reply to additional questions from reporters, including whether the killing was premeditated.

The Seoul Jungbu Police Station brought eight charges against him, including revenge murder, stalking and threatening, as it handed the stalking murder suspect over to the prosecution earlier in the day to be formally indicted.

Kim was arrested a week earlier on suspicions of stabbing his former girlfriend to death at her studio apartment in central Seoul after incessantly stalking her since their separation five months ago. 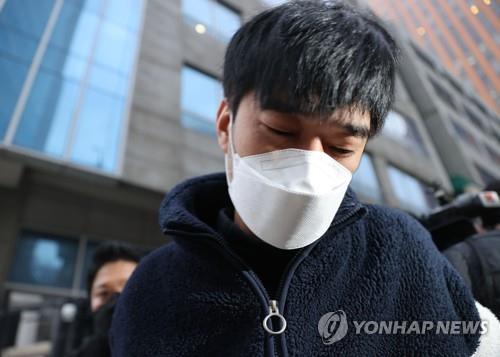 According to the results of a forensic probe into his mobile phone, Kim searched the internet for information on weapons and crime methods after the victim reported his stalking to the police in early November, out of an "urge for revenge," a police official said in a briefing.

Kim came to Seoul from his home in Busan a day before his crime, bought a cap and a knife near the victim's home the next day and killed her at her flat in the Jung-gu district, the official said.

Kim is also suspected of breaking into her previous home in Busan and her vehicle on several occasions, and confining and threatening her with a weapon before and around their separation around June.

The case has drawn public fury upon revelations the woman was under police protection after filing four complaints with them against Kim's stalking since early November.

On the day of her death, she made two emergency calls via a smartwatch provided by the police, as Kim had been hovering around her home since the morning. Police, however, arrived at the scene too late to stop the murder due to the police device malfunctioning.

Last week, police publicly disclosed Kim's personal information, including his name and a photo of his face, a decision police take for suspects of heinous crimes.

Police initially raised a murder charge against Kim but later switched it to a charge of revenge murder, given that he might have been motivated by the victim's police reports against him. Revenge murder is punishable by a prison term of 10 years or more. 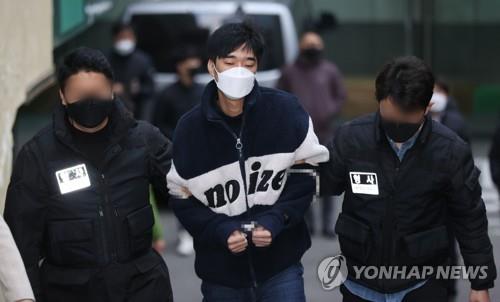