SEOUL, Nov. 29 (Yonhap) -- At-home treatment for COVID-19 will be promoted while virus patients in serious condition are hospitalized, as the bed shortage is deepening amid spiking cases, health authorities said Monday.

The Korea Disease Control and Prevention Agency (KDCA) also said starting on Dec. 20, the expiration date of the "vaccine pass" will be set at six months.

Currently, high-risk facilities, such as bars and nightclubs, have introduced a vaccine pass system that requires visitors to be fully vaccinated or have a negative test result.

The health authorities said those aged between 18 and 49 will get additional vaccine shots five months after they are fully vaccinated.

Also, a ban on private gatherings may be further tightened.

Under the eased social distancing rules, private gatherings of up to 10 people are allowed, regardless of vaccination. Still, wearing a face mask indoors is mandatory.

The KDCA said it has become impossible to move on to the second phase of the country's ambitious scheme to gradually return to normal life.

Under the first of the three-phase scheme, the government relaxed most of its coronavirus restrictions, such as nighttime curfews on cafes, restaurants and other multi-use facilities.

South Korea's quarantine efforts have stood at a critical juncture as it has seen a surge in COVID-19 related deaths and critically ill patients.

On Monday, the country reported 3,309 new COVID-19 cases, staying below 4,000 for the second straight day, due largely to fewer tests.

The risk level of the pandemic in South Korea's capital area over the past week has reached the highest level.

Last week, South Korea introduced a new five-tier assessment system to evaluate the risk level of COVID-19 on a weekly basis that will be used to decide whether to further ease virus restrictions under its three-phase "living with COVID-19" scheme, which began on Nov. 1.

The level for the greater Seoul area, which includes Seoul and the surrounding Gyeonggi Province, has jumped from the fourth highest level to the fifth, the top level, in just one week, according to the KDCA.

The KDCA said the other parts of South Korea have remained at the third highest degree for two consecutive weeks. 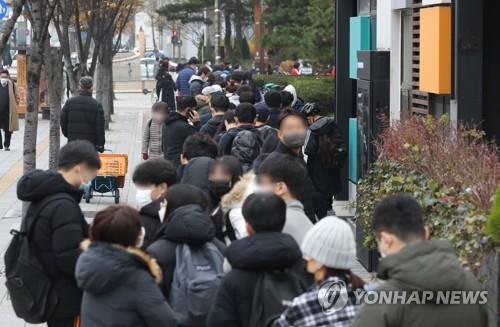