SEOUL, Nov. 30 (Yonhap) -- Cardinal Andrew Yeom Soo-jung retired as the Catholic archbishop of Seoul and apostolic administrator of Pyongyang on Tuesday, after more than nine years of service in the post.

Appointed as the archbishop of Seoul in May 2012, Yeom went on to serve in the post for about nine years. He was replaced by Archbishop Peter Chung Soon-taick.

As he looked back on his past years during a Mass to mark his retirement at Myeongdong Cathedral in central Seoul, the outgoing archbishop said he was given "too heavy a cross to bear." 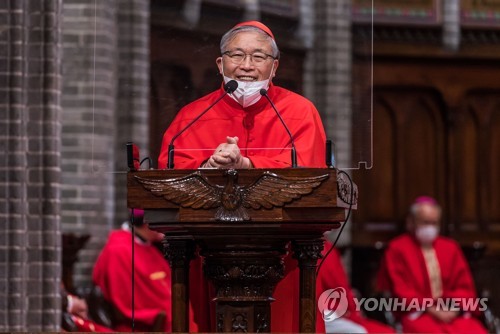 "I've lived 51 years as a priest and 20 years as a bishop, and nine years and a half as a diocesan bishop with the last duty being too heavy a cross to bear for me," he said, humbly adding that he "wasn't good enough" for the job.

"I ask for God's grace to help Archbishop Chung Soon-taick and the archdiocese of Seoul contribute to making our society bright and beautiful as the light and salt of the world, and will pray for this together."

The Mass was attended by Chung, Apostolic Nuncio to South Korea Alfred Xuereb, and about 600 other priests and faithfuls.

Born in 1943 to a family of Catholic martyrs in Anseong, 77 kilometers south of Seoul, Yeom graduated from the Catholic University of Seoul in 1970 and was ordained to the priesthood in the same year.

After being consecrated as a bishop in 2002, he worked as chairman of the Catholic Peace Broadcasting Corp. and president of the Babo Nanum Foundation, a local charity group.

He became the 13th archbishop of Seoul after late Cardinal Nicholas Cheong Jin-suk retired from the post in 2012. In February 2014, he was appointed as the third Korean cardinal. 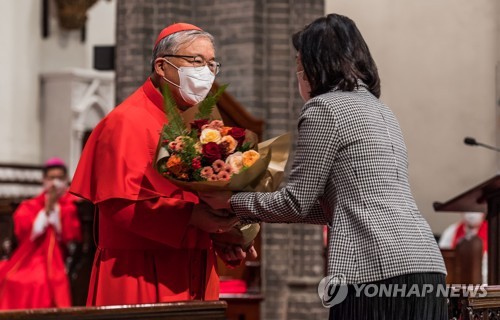