The negotiations are under way at the EDEX 2021, a major defense exhibition in the Egyptian capital of Cairo, which opened a four-day run Monday with the participation of major South Korean firms, including Hanwha Defense, the manufacturer of K-9 howitzers.

Negotiators from the two countries have been discussing the idea of Egypt purchasing the K-9 howitzers and K-10 ammunition resupply vehicles in a package deal, which would also include a technological transfer for the local production of the artillery system, the officials said.

If the deal is struck, it would mark the first export of the K-9 howitzers to the Middle Eastern and African regions. South Korea has exported the howitzers to Turkey, Poland, India, Norway, Finland and Estonia. Last year, Australia also chose the Korean manufacturer as a preferred bidder for its artillery procurement project.

In a written interview with South Korean reporters, Hanwha Defense CEO Son Jae-il highlighted his company's eagerness to carve out a foothold in the new market.

"African and Middle Eastern nations, including Egypt, have great interest in the K-9 system," he said. "Through a tailored marketing strategy, we will focus on tapping into the new global defense markets."

The Cairo exhibition has brought together some 350 defense firms from about 40 countries. Among them were South Korean firms like Hyundai Rotem Co. and Poongsan Corp. 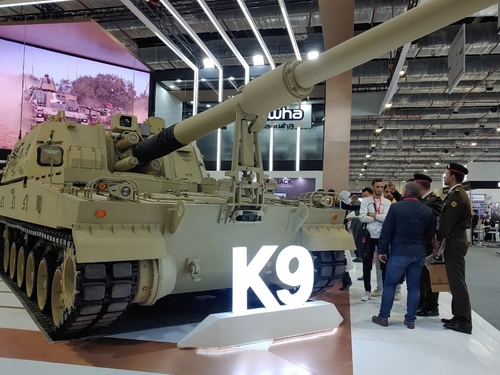