Austin landed at Osan Air Base in Pyeongtaek, 70 kilometers south of Seoul, for a three-day trip on the eve of the 53rd Security Consultative Meeting (SCM) at the defense ministry here.

This year's SCM comes days after Washington concluded nine months of a global defense posture review, calling for tighter cooperation with allies to confront security challenges from an increasingly assertive China and a recalcitrant North Korea.

At the SCM, Seoul's Defense Minister Suh Wook and Austin are expected to discuss when and how to conduct the full operational capability (FOC) assessment -- the second part of a three-phase program designed to verify if South Korea is ready to retake wartime OPCON. 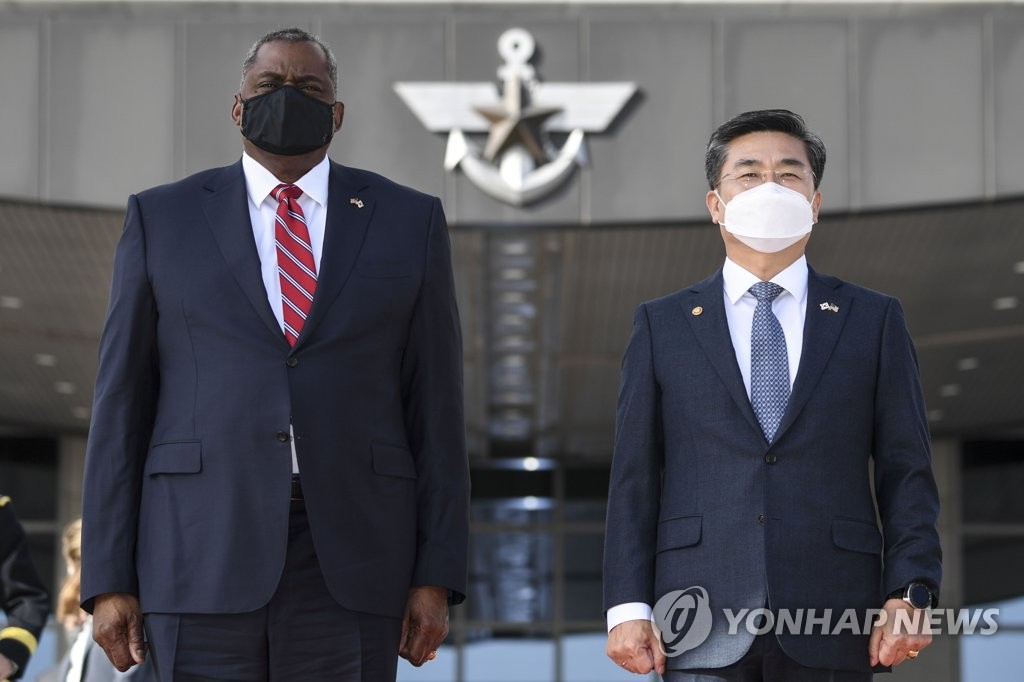 On an upbeat note, a defense ministry official here has said the allies' discussions on the OPCON transition have been proceeding "very amicably," raising expectations that the FOC assessment could likely begin next year.

Lingering North Korean threats will also be high on the agenda, as Pyongyang has been seen as doubling down on its nuclear and missile programs while refusing to accede to the allies' repeated overtures for dialogue.

On Monday, Mara Karlin, a Pentagon official, told reporters that North Korea will be a "robust" topic for Austin's talks with Seoul officials, stressing the U.S. remains concerned about the North's "problematic and irresponsible" behavior.

Defense One, an online news outlet, reported, citing a U.S. official, that at the SCM, the allies are expected to announce a "new strategic planning guidance" to start the process of developing a new war plan that takes into account the North's nuclear and missile launch advances.

What Austin has termed the "pacing challenge" from China is also expected to be discussed at the SCM, John Kirby, the spokesperson of the Pentagon, has said.

The U.S. has been striving to rally its allies and partners to preserve what it calls the rules-based order, which it believes has been eroded by China, in the midst of a Sino-U.S. rivalry over maritime security, technology, trade and other fronts.

The SCM is also expected to touch on the planned return of parts of the U.S. military garrison in Yongsan, central Seoul, to South Korean control to back a mega project to build a national park there, as well as cooperation in strategically crucial security realms of cyberspace and outer space.

Hours after his arrival in Seoul, Austin will attend an annual alliance dinner session hosted by the Korea-U.S. Alliance Foundation and the Korea Defense Veterans Association.

In 1971, the meeting was elevated to the allies' annual security talks and renamed the SCM. The SCM has made a series of key decisions for the alliance, including the 1978 creation of both the South Korea-U.S. Combined Forces Command and the MCM.