Outbound shipments came to US$60.44 billion, compared with $45.75 billion from a year earlier, according to the data compiled by the Ministry of Trade, Industry and Energy.

It marked the highest monthly figure since the country began compiling the data in 1956, and it is the first time that the monthly tally surpassed the $60 billion mark, the ministry said.

The previous record was $55.92 billion posted in September this year. In October, exports came to $55.62 billion. The monthly figure first exceeded the 50 billion level in October 2013.

November also marked the 13th straight month that the country's exports have extended gains. The country has logged double-digit growth in exports since March.

Imports advanced 43.6 percent on-year to $57.36 billion last month, resulting in a trade surplus of $3.09 billion. It marked the 19th consecutive month that the country's exports exceeded imports, according to the ministry. 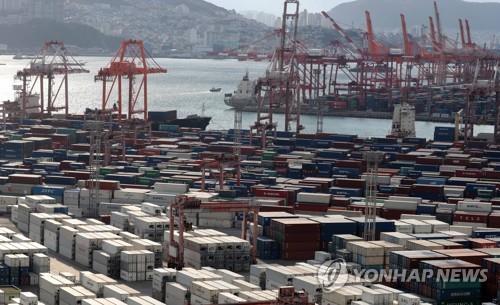 The country's cumulative exports came to $583.8 billion during the first 11 months of the year, the highest to date. The ministry expected the figure to hit an all-time high in mid-December by beating the previous yearly record of $604.9 billion set in 2018.

The total trade volume was also to beat the yearly record of $1.14 trillion set in 2018, as it came to $1.138 trillion by end-November, according to the ministry.

By segment, sales of semiconductors jumped 40.1 percent on-year to $12.04 billion last month, the largest amount for any November, amid the brisk global foundry market and the growth in the exports volume.

Exports of petrochemicals climbed 63 percent to $4.84 billion on the back of strong global demand amid an economic recovery from the COVID-19 pandemic.

Sales of steel, computers and secondary batteries, as well as agricultural and marine products and cosmetics, also marked double-digit growth in November.

But exports of auto parts fell 2.2 percent on-year to $1.84 billion, and the bio sector saw its sales down 0.7 percent on-year due to a high base effect, the data showed.

By region, exports to nine major regions grew for the eighth consecutive month in November, according to the ministry.

Exports to China rose 27.1 percent on-year to $15.3 billion last month, reaching an all-time high, on strong demand for chips, petrochemicals and machinery, among other items. Those to the ASEAN nations also hit a record high of $10.58 billion by going up 32.8 percent on-year buoyed by solid demand for IT products and steel products.

Sales to the United States increased 22 percent to $8.13 billion, and those to the European Union expanded 18.9 percent to $5.29 billion last month, the data showed.