SEOUL, Dec. 1 (Yonhap) -- U.S. Defense Secretary Lloyd Austin on Wednesday stressed the importance of unity in the South Korea-U.S. alliance to confront the "challenges of tomorrow" amid an intensifying Sino-U.S. rivalry.

Austin made the remarks during a dinner gathering in Seoul, hours after he arrived in Seoul to attend the two countries' annual defense ministerial talks, the Security Consultative Meeting (SCM) slated for Thursday.

"No one should set out on a long journey without a trusted partner, knowing that any perils encountered along the way were better faced together. That ideal drives our efforts to look across the horizon and to confront the challenges of tomorrow," Austin said. 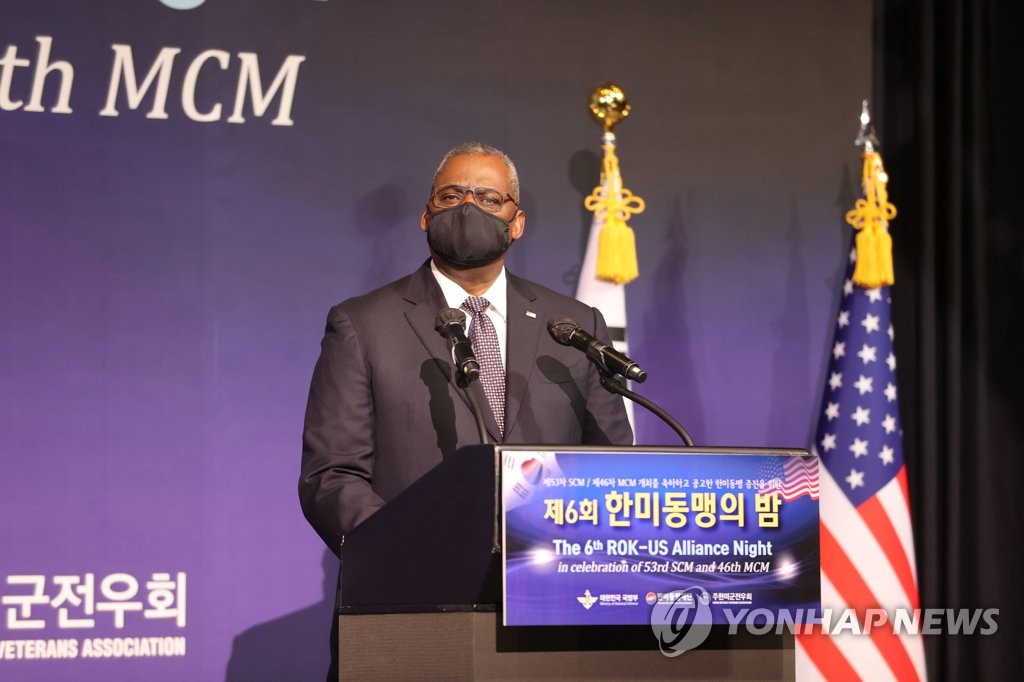 "We'll do it the way old friends should together and may we go forward together now and for many, many decades to come," he added.

Austin also cast the bilateral alliance as a partnership built on "common values and principles."

"We share a special type of trust because we have fought and sacrificed alongside one another to defend freedom and democracy," the secretary said.

At the gathering, the Pentagon chief also highlighted the "ironclad" commitment to the defense of South Korea, amid lingering concerns over North Korea's evolving nuclear and missile programs.

The dinner session meant to celebrate the 53rd SCM was hosted by the Korea-U.S. Alliance Foundation and the Korea Defense Veterans Association.

On the margins of the event, former U.S. congressman Charles Rangel received a South Korean government award for his dedication to the alliance. He did not attend the ceremony in person.

Rangel, also a Korean War veteran, was given this year's Paik Sun-yup Award, which was named after the best-known South Korean hero of the 1950-53 conflict. The former congressman served as a representative in the district of New York from 1971 to 2017.